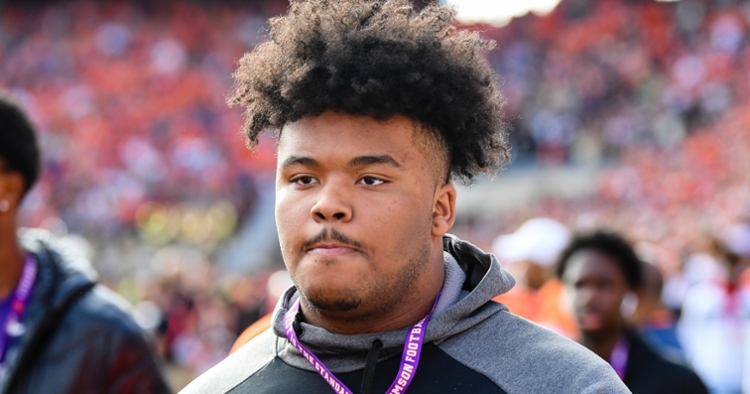 Payton Page loves what Clemson has to offer.

If you want a seat in Clemson’s 2021 recruiting class, you might want to make a decision sooner rather than later.

Clemson added the 13th commitment for the 2021 recruiting cycle Tuesday with the addition of four-star defensive end Zaire Patterson of Winston-Salem (NC) Winston-Salem Prep. The Tigers will take somewhere in the 18-20 range for this class, and certain spots seem to be full.

So where do the Tigers stand at the defensive position groups, with just 5-7 spots remaining?

We will start with the defensive line. My expectation was that the coaches would take two defensive ends this cycle, and the addition of Patterson to Cade Denhoff – who committed earlier this season – would seem to fill both of those spots.

So, what about Korey Foreman, the one-time Clemson commit who wanted to take his visits? As of now, there are no spots open for the California playmaker. You will hear a lot of people say that Foreman is an oversign possibility, but that isn’t the way Dabo Swinney works. He recruits for the spots he knows are open now – and I’ve been told that means two defensive ends.

Is that set in stone? Absolutely not. If there is attrition at the position – someone decides to transfer or makes their intentions to leave early for the NFL known at an early date – another spot could open up. For now, however, the door at defensive end appears to be closed.

At defensive tackle, the Tigers have numbers at that spot. In fact, Clemson is so loaded at the position that the coaches felt comfortable in moving Tayquon Johnson to the offensive line in the spring. The Tigers have centered in on 4-star tackle Payton Page out of Greensboro (NC) Dudley.

Page loves what Clemson is offering, saying the coaches offer a “real” message to recruits. When prompted for an example of the different message the Clemson coaches have to offer, Page didn’t hesitate in replying.

“You are going to have to work for your starting position. That is what they told me,” Page said. “That is the most real thing I've heard yet. Talking to some other schools, they tell me that I have a starting position right out of the gate. I know that is a lie. I know there is another dude that y'all have over there that knows the plays and is going to be more qualified at that position before I get there. And then y'all are not going to let me work for it? That doesn't make any sense.”

Page said he wants to make a decision before his senior season, but a definitive date is on hold because he wants to visit each one of his three finalists a final time.

He tallied 71 stops, 26 for loss, with three sacks and six QB hurries as a junior. He has 55 TFLs and 13 sacks over his high school career.

At linebacker, defensive coordinator and linebackers coach Brent Venables filled one of two spots during camp last June with the addition of 4-star ILB Jeremiah Trotter of Philadelphia (PA) St. Joseph’s. The other spot was taken recently by 4-star Barrett Carter out of Suwanee (GA) North Gwinnett.

At corner, the coaches filled one of two spots with 4-star Jordan Hancock of Suwanee (GA) North Gwinnett. Hancock committed back in March after a junior day visit. Other names to watch for the other spot include 3-star Ryan Barnes of Gaithersburg (MD) Quince Orchard, who had Clemson in his top schools released Tuesday. Four-star Nyland Green out of Covington (GA) Newton and 4-star Ga’Quincy McKinstry out of Pinson (AL) Pinson Valley are two others who bear watching.

As of now, it appears as if the Tigers will take one safety, and the recruit we’ve dialed in on for now is Andrew Mukuba out of Austin (TX) Lyndon B. Johnson.

Mukuba told me two weeks ago that Clemson’s staff hasn’t experienced as much turnover as other schools and that resonates.

“Clemson is a great school, not just for football but its people. It's the people that are there and the environment,” he said. “Coach Swinney has been there for 18 years. I think that is what he told me. And Coach Venables has been there for a while, too. They have all been there so long. Things on that coaching staff aren't going to change anytime soon. Clemson is also in the top four every year competing for the National Championship. They are definitely at the top.”

“It definitely helps me because you see coaches who help you develop at my position,” Mukuba said. “One of my main goals is to get to the NFL so that makes a big difference.”

Clemson has vaulted to the forefront of Mukuba’s recruiting, and he wants to make the trip to the foothills of South Carolina as soon as travel restrictions for recruits are lifted.

“I am going to get to Clemson as soon as possible. Whenever I talk to the coaches, they speak very highly about the family feel that they have there,” he said. “Whenever you go there you are going to feel like you are apart of the family. That is one thing I am interested in seeing. I want to see how that affects me and how I look at that when I get there. I love family values and I am all about communication so that is what I want to see.

“I've been doing a lot of Zoom visits and things like that but I am ready to get out and see them with my own eyes and be there physically.”

Over the next day or so we will take a look at the remaining offensive targets.