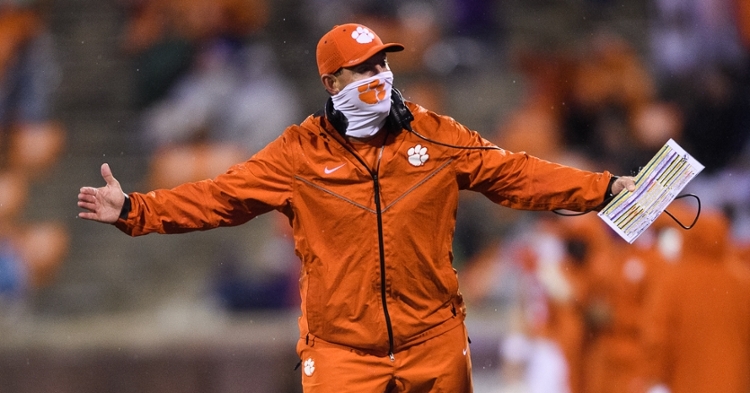 Swinney says if it was up to him, Clemson wouldn't travel back to Tallahassee on Dec. 12. (Photo courtesy ACC)

An angry Dabo Swinney hopped on a phone call with the media Sunday evening, and he didn’t pull any punches, saying that Florida State used COVID as an excuse to postpone Saturday’s contest in Tallahassee and that in his mind the Seminoles have forfeited the game.

The news broke early Saturday – three hours before kickoff – that Florida State’s medical personnel deemed the game unsafe for Seminole players after a Clemson player tested positive for COVID Friday. The player, a backup offensive lineman, made the trip to Florida with the team but was isolated and sent home after learning of the positive test.

According to Swinney, the Tigers met every standard and requirement for playing the game and the Seminoles merely used COVID as an excuse for not playing.

“Our players and our staff, we have sacrificed all year long. We have demonstrated incredible commitment and we've done everything that's been asked,” Swinney said. “Each week, there is an enormous amount of preparation that goes into getting ready to play. I'm incredibly disappointed that we did not play and I'm disappointed in the decision to not play. We had one guy test positive on Friday so they canceled the game, even though all protocols were followed. Also, that's why we test on Friday before the game because a guy can be negative Monday, Tuesday, Wednesday, Thursday. He can be negative all week and can be positive on Friday, so that's why we test on Friday.

“It's also why we as a league voted to expand the travel roster from 72 to 80 in expectation that there would be positives on Friday so that you could take more guys to be available. No one ever had the illusion that there wouldn't be a positive on a Friday, so that's why the roster was expanded. Any time a guy is positive, whether it be a Monday test, a Wednesday test, a Friday test, that person has been practicing and playing prior to being positive. In fact, we can all test negative on Friday and that doesn't mean someone doesn't turn positive before kickoff on Saturday and we all have known that. The standard to cancel a game was not met. A guy testing positive on Friday does not cancel a game. I was on every committee call for months since March and that was never the case. Never once was it said that if a team had a player test positive on a Friday test that the game would be canceled. The only thing that we talked about in canceling the game was not having enough scholarship guys or at least seven offensive linemen.”

Swinney said Clemson went above and beyond to ensure the game was played, and in his opinion, COVID was not the reason Florida State backed out of playing.

“As Dan (Radakovich) said, we offered to test again and play Saturday night, Sunday, Monday and it was declined,” Swinney said. “We spent 300-plus thousand dollars to travel. We set up a Ringling Brothers tent and took up an entire parking lot to do what we have to do to meet the standards. We had people travel from all over the country to come to the game. We met the standard to play and we should have played. We have mitigated everything all year long - meetings, practices, meals, housing, how we travel. If the standard to play was zero positive tests, then we would've never had a season.

“This game was not canceled because of COVID. COVID was just an excuse to cancel the game. To be honest with you, I don't think it has anything to do with their players. I have no doubt that their players wanted to play and would have played. Same with the coaches. To me, the Florida State administration forfeited the game and if they want to play Clemson, in my opinion, they need to come to Clemson or they need to pay for all expenses. Other than that, there's no reason for us to play it. We were there, we were ready and we met the standards. From my perspective, that's in the rearview mirror and our focus is 1,000-percent on getting ready for a tough, very well-coached Pitt team.”

Swinney said that he has not talked to ACC Commissioner John Swofford or Florida State head coach Mike Norvell. He then said everyone knew there would be Friday positives.

“Yes, that's why we test on Friday. That's why we set it up that way. Everybody knew that we wanted to have one last test before the game and if there were positives, we could take them out from playing,” Swinney said. “We mitigated all of the direct contact from travel, housing, you name it. There was never any illusion that there wouldn't be any positive tests on a Friday. Again, we never discussed that if you had one then you cancel the game.”

“They weren't happy. They were ticked. Most people have no idea what goes into a week of preparation,” Swinney said. “These guys have buy-in and commitment into the protocols and we've gone to extremes to be able to play. The guys were incredibly disappointed but we got on a plane and came home and we will move on to the next one. This team has risen to every occasion all year long and I have no doubt they will continue to do that.”

Swinney was asked if he had a reason that Florida State might want to postpone – the Seminoles have battled injuries and opt-outs in recent weeks – and he declined to speculate on the reasoning behind the decision.

“I can't answer that. I just know the standard to play was met. I just know they canceled the game. You either trust the test or you don't. It's that simple,” Swinney said. “If a guy has an earache or a runny nose all week and he tests negative, and you say well, we won't take you. You either trust the tests or you don't and the rules are what they are. There have been plenty of games played this week where guys have tested negative one week and positive the next week. This is a virus. We all know what we are dealing with. And the bottom line is that the rules are put in place for everyone and we more than met the standard to play and they decided to not play.

“You can say whatever you want to, I don't know what their reasoning is. Just mild symptoms. Didn't practice Monday or Tuesday, practiced Wednesday and Thursday and tested negative both days. But that is why test and why expanded the rosters. This can happen. That is why we wear masks and shields and have nine buses. That is why we have a tent put up in the entire parking lot of a hotel.”

Swinney said if it was up to him, the Tigers wouldn’t travel to Tallahassee for a makeup game in December and that in his mind, Florida State effectively forfeited the game.

“We were there and we were ready and we met the standards to play that were set forth. Period. They canceled the game and in my opinion, they forfeited the game,” he said. “There was no reason to cancel the game. That is $300,000 out the window.”

Florida State officials said they were concerned about other Clemson players being exposed to the virus, but Swinney isn’t buying that excuse.

“If that is their concern why did they play this year? I have seen no example of that. Zero,” Swinney said. “If that was their worry they shouldn't have played the season. We test on Friday, guys. If you test negative Thursday and then positive on Friday, you can test negative on Friday and then be positive Saturday during the game and not know it. We all know that. The standard to play was met.”

“That is correct. Trevor Lawrence practiced all week, too. The only day he didn't practice was Thursday. BC didn't have a problem coming on down here to play. They had no problem,” Swinney said. “Notre Dame wasn't worried about any lingering effect. And again, anybody who tests positive has been practicing and playing prior to the positive. I don't care if you test on a Monday, well you just played a game on Saturday. It's the same for every test. Like I said, BC didn't have a problem rolling down here and playing.

“And yes, we've had that where we had to send a guy home. We've traveled several times this year, we've been to Wake and we've been to Georgia Tech and we've been to Tallahassee, and we had a breakfast in the parking lot and had a tent revival and came on back. I don't know what else you can do unless the medical advisory wants to change all the rules. And they seemed to change Saturday in Tallahassee.”