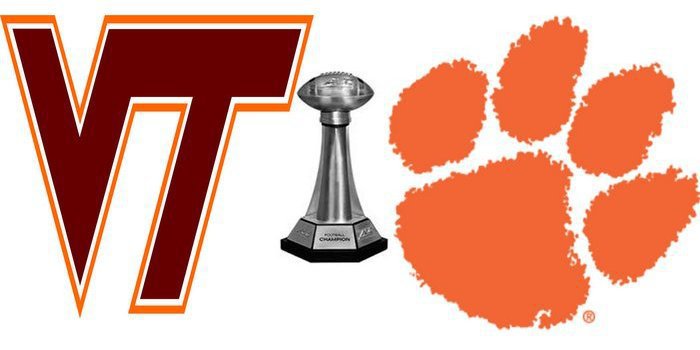 It’s the Tigers and the Hokies. It’s Dabo Swinney and Justin Fuente, Deshaun Watson and Jerod Evans. It’s Brent Venables and Bud Foster. It’s the Coastal and the Atlantic.

No. 3 Clemson and No. 19 Virginia Tech face off in the title game Saturday night, and there’s a lot on the line. A Clemson win would likely propel the Tigers into the College Football Playoff, while a win by the Hokies would send Tech to the Orange Bowl as the ACC’s representative.

*Danny Pearman has worked for both teams in Saturday’s contest. Pearman is currently Clemson’s assistant head coach, special teams coordinator and tight ends coach. The 1987 Clemson graduate is in his eighth year overall at Clemson as a full-time coach. He served as a graduate assistant at Clemson for the 1988 and 1989 seasons. Pearman coached under Frank Beamer at Virginia Tech from 1998 to 2005. During that time the Hokies played in eight bowl games in eight seasons. That includes an 11-1 record in 1999 when they faced Florida State for the National Championship in the Sugar Bowl. Virginia Tech won at least 10 games in five of those eight seasons, including 2004 when the Hokies won the ACC title and played in the Sugar Bowl.

*Clemson has faced the third most difficult schedule in the nation according to the NCAA, which takes into account the cumulative winning percentage of your FBS opponents when not playing you. Clemson’s FBS opponents are a combined 68-42 this year when not playing Clemson, a .618 winning mark. Only Tennessee and Ohio State have a higher percentage. Clemson’s percentage will go up after playing a 9-3 Virginia Tech team in the ACC Championship game. Ten of Clemson’s 11 FBS regular season opponents this year are bowl bound, and Virginia Tech will make it 11 of 12. The only team Clemson faced this year that won’t go to a bowl is Syracuse.

Led by defensive Ken Ekanem (entering the season with 26 consecutive starts) and safety Chuck Clark (23 straight starts), the defense had a combined 15 Hokies returning that had 142 combined starts under their belts and included 126 for the players listed at first string. The Hokies are deep and talented across the board on defense, and Clemson is deep and talented on offense. The Tigers are led by quarterback Deshaun Watson, who is accounting for 336.7 yards per game and leads the league with 298.1 passing yards an outing. Watson also has run for 425 yards and four touchdowns, and that might be the part of the game where the Tigers have the clear advantage.

Virginia Tech lost three games this season - to Tennessee, Syracuse and Georgia Tech – and in all three, the opposing quarterback ran for more than 100 yards. The past 10 times an opposing quarterback has run for 100 yards or more, the Hokies have lost. Watson has been more active in the run game the last few weeks, and you can expect to see Watson make the Hokies stop the run. If the Hokies load the box, Watson has weapons like Mike Williams, Jordan Leggett and Artavis Scott on the outside. Tech is playing well on defense, but Clemson is playing better. ADVANTAGE: CLEMSON

WHEN VIRGINIA TECH HAS THE BALL

Tech’s offense has seen a resurgence under Fuente. In 12 games this season, Tech has turned in at least 450 yards of total offense in seven. This year marks just the fourth time in the last 30 years that a Tech offense produced six games with at least 450 total yards in a game. Quarterback Jerod Evans makes the defense go, completing 226 of 354 passes for 3,045 yards and 26 touchdowns. He’s also the team’s leading rusher, carrying the ball 161 times for 713 yards.

Where the Hokies might have an advantage is at tight end. Big old Bucky Hodges is a matchup nightmare for opposing defensive coordinators, a 6-7, 245-pound behemoth who can make plays all over the field. He’s third on the team with 42 receptions for 598 yards and seven scores. The Hokies will spread the field, but their offense runs more like a triple-option that runs from the spread. The key for the Tigers will be stopping the designed quarterback runs and the tight end in space. The Tigers have the defensive line to make the former happen, but the latter could be a problem. ADVANTAGE: VERY SLIGHT TO CLEMSON.

Despite missing three games, Tech’s Greg Stroman is one of five players nationally with over 200 punt return and 400 kickoff return yards - he has 221 punt return yards and 460 kick return yards. Stroman is third all-time in the school’s record book for career punt returns with 92 and his 711 return yards rank him eighth. In his career, Tech kicker Joey Slye is 45 of 49 (91.8 percent) from inside 40 yards and had made 24 straight dating back to a 37-yard attempt at East Carolina (9/26/15) before his only miss this season from that distance - 34 yards at Duke (11/5). He is a perfect 24 for 24 in his career from inside of 30 yards. Of note, Slye’s career long is 49 yards, and so he has never made a kick over 50 yards. Clemson is getting consistent production from kicker Greg Huegel and Artavis Scott brought stability to the punt return game last week. The coverage teams continue to be excellent, but the Tigers haven’t been able to break a long return since Scott’s long return against Louisville. ADVANTAGE: VIRGINIA TECH

Virginia Tech has a good football team, they are playing well and you can bet the house they are wanting to come out and shock the world Saturday. They are dangerous. But this is also the first title game appearance for any of their players, while Clemson’s roster is filled with players who have performed in big games. The biggest difference, however, is that the Clemson offense is clicking. Hitting on all cylinders. Name your cliché. This group is simply playing at a different level right now, and one person in the WestZone this week told me that this club has rebounded from the Pitt loss and is “on a rampage the playoff.” The rampage continues.