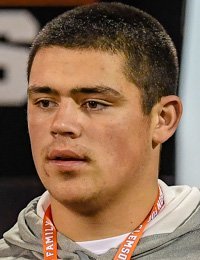 Defensive Tackle
B I O
Maxpreps Junior All-American and the Gatorade player of the year for Maryland with 36 tackles for loss and 12.5 sacks. Committed to Clemson over Georgia, Penn State, Ohio State, Alabama and Michigan on April 23, 2019.

Signed as the top-ranked overall player in the nation by Rivals.com and 247Sports … will play in the U.S. Army All-American Bowl on Jan. 4, 2020 … ranked by most as the top defensive player in the nation and among the top five players overall … first-team USA Today All-American as a junior in 2018 when he was also named the Gatorade Player of the Year in Maryland … participated in the Opening in Frisco, Texas in the summer of 2019.

Played for Eric Wallich at Damascus High School in Damascus, Md. … concluded career with 134 career tackles, including 80.5 for loss, with 35 sacks … had 47 tackles in 2019, but 30.5 of them were tackles for loss including 14 sacks … also added two forced fumbles, a fumble recovery and a pass breakup … helped team to 13-2 record and state championship as a senior … first-team Washington Post All-Met defensive lineman as a junior and senior … Maryland Defensive Player of the Year in 2018 … first-team MaxPreps Junior All-American defensive lineman in 2018 … Montgomery County 3A MVP in 2018 … Gatorade Player of the Year in Maryland as a junior in 2018 … team won state championship in Maryland in 2018 with a 38-0 victory in the championship game … had 36 tackles for loss, including 12 sacks, as a junior, earning first-team MaxPreps Sophomore All-America status in 2017 … played basketball as a junior and averaged 13.7 points and 11.9 rebounds.

Committed to Clemson on April 23, 2019 … recruited to Clemson by Todd Bates … last name pronounced bruh-ZEE … wore No. 55 in high school … expected to enroll at Clemson in January 2020.