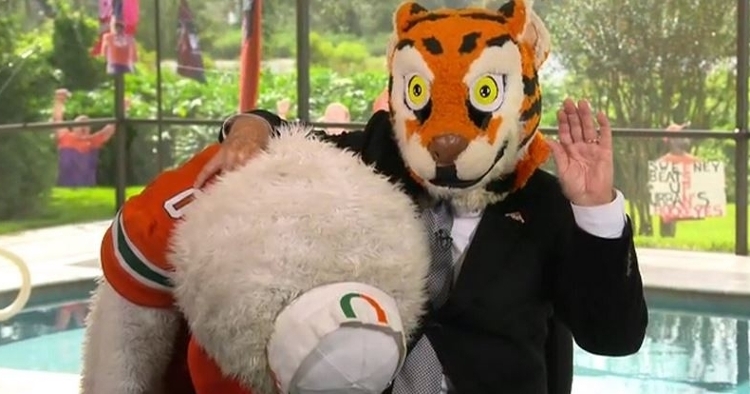 No. 1 Clemson took care of No. 7 Miami with an impressive 42-17 victory on Saturday night.

Trevor Lawrence was 29-41 passing for 292 yards and three touchdowns and Travis Etienne ran for 149 yards and two scores and added eight catches for 73 yards.

Check out Twitter's reaction to the victory from the national media, Clemson fans, and former players:

TALK TO HIM TREVOR pic.twitter.com/a4sOpNYHhT

Greatest to ever run in college football https://t.co/3iGC8sfHPp

I'm no genius, but Miami-Clemson had the scent of a big game in name only.

"Clemson better watch out for Miami ??"

The turnover chain was no match for Trevor Lawrence and the Tigers ??

Best QB and RB in the country

to getting its ass kicked by Clemson.

Travis Etienne has now scored a TD in 39 games in his career — more than any other player in college football history.

He has at least 7 more games ahead of him.

Nothing says Miami football like taunting down 25 in the 4th. The U is truly back.

Can we take a second to discuss just how athletically gifted this play is by Clemson CB Andrew Booth? Going to be a stud for this defense. pic.twitter.com/Y64d9pLF86

Clemson is running away with it ?? pic.twitter.com/I7M8wQlHXc

picturing what Travis Etienne/Clemson is gonna do to FSU's run defense ... charges should be preemptively filed .. right now.

Another difference in the two programs....Clemson has rotated absolute dudes on the DL all night. Miami's four starters have had little rest

Enjoy every second of his highlight... pic.twitter.com/bL4nEHIB1f

Dont even know how happy it felt to just touch the field again?? I LOVE THIS TEAM!!! LETS GOO

The most eye-opening stat of the night to me was not what the defense gave up but how the Miami offense was so thoroughly taken out of its game. A team that had averaged over 200 yds rushing had its top 3 backs gain a total of 11 yards. Clemson dictated the tempo, not Miami.

Just Swinney in the rain. ?? pic.twitter.com/yPdKPfDnG1

Coach Swinney on the defense: “They were relentless. We had a good scheme tonight. We did an awesome job, disrupted them all night. Sacks, turnovers. It was a turnover fest in the second half.” pic.twitter.com/3n0jkb7Zuf