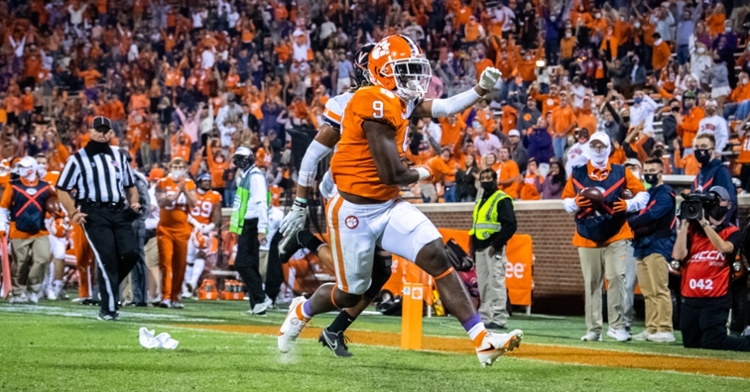 CLEMSON – Virginia was better but still not good enough.

Ten months after losing by 45 in the ACC Championship Game in Charlotte last December, Virginia played better and tougher but still didn’t do enough as a sometimes lethargic Clemson team defeated the Cavaliers 41-23 in Death Valley Saturday night.

Clemson improves to 3-0 overall and 2-0 in the ACC, while Virginia falls to 1-1 both overall and in the league. The Tigers host Miami at 7:30 next Saturday in what will be a primetime matchup of top 10 teams (7:30 p.m. ABC). The Hurricanes are 3-0 and were off this week.

Trevor Lawrence was 25-for-38 for 329 yards and three scores, while running back Travis Etienne carried the ball 14 times for 73 yards. Etienne also had five receptions for 114 yards, while Amari Rodgers had six catches for 72 yards and Frank Ladson had five catches for 71 yards.

Clemson has won a school-record 24 straight home games and is a national-best 43-1 at home since 2014. Clemson improves to 40-8-1 against Virginia all-time.

Clemson won its 24th consecutive game against an ACC opponent, including postseason play. A 24-game winning streak against conference opponents ties the 1998-2001 Florida State Seminoles for the third-longest streak in conference history.

“It was a great environment and I appreciate our fans,” Swinney said. “Really want to take my hat off to Virginia and Bronco (Mendenhall). I thought they did a heck of a job. That team is going to win some games. No doubt about it. Just what I thought I would see as far as that quarterback. He is a really good player, very experienced offensive line, very experienced defense. They created some problems for us.

“But really proud of our guys. It’s kind of the end of the first quarter, if you will, of our season. We play three games and we’re really, really proud of the guys for getting to this point and being 3-0. Obviously, we’ve got a lot we got to improve on but you play the game that you that you’re in. I thought we obviously won the game by double digits, but I thought we left a lot out there tonight on both sides of the ball. I thought special teams for the third game in a row continues to be a real bright spot for us. B.T. (Potter) has been awesome. (Will) Spiers has been really, really solid for us.”

The first half was ragged at times. The Tigers were forced to kick a field goal on the first possession of the game, and BT Potter nailed a 46-yarder for a 3-0 lead. The Tigers were forced to punt on the second drive of the game, but put together a nine-play, 63-yard drive for the game’s first touchdown. Travis Etienne broke two tackles and rumbled 16 yards up the right side for the score, and Clemson led 10-0.

It was a 38th career game with a TD for Etienne, which tied him for the NCAA record with Florida's Tim Tebow and Louisiana Tech's Kenneth Dixon.

Virginia got on the board with a 27-yard field goal to make it 10-3 early in the second, but the Tigers moved 75 yards in 11 plays and Amari Rodgers caught a 27-yard laser from Lawrence in the back of the end zone that made it 17-3.

Nolan Turner intercepted a Brennan Armstrong pass on the ensuing drive, and Clemson turned that into a 9-yard pass from Lawrence to Rodgers and 24-3 lead with 3:25 left to play in the half.

The Tigers forced a Virginia punt but went three-and-out after the punt, and the Cavaliers marched 65 yards in just four plays and got a 23-yard pass from Armstrong to Terrell Jana with 41 seconds remaining. Clemson led 24-10 at halftime.

The Tigers avoided early trouble on the first drive of the second half. Clemson safety Lannden Zanders was called for targeting – an ejection would have meant he would miss the first half of next week’s game against Miami – but the call was overturned and Zanders was allowed to continue. Two plays later, Andrew Booth made a remarkable one-handed interception in the end zone to thwart the Cavaliers’ scoring opportunity.

Facing a 3rd-and-17 at their own 26-yard line, the Tigers got another big play from Etienne. Lawrence dropped off a pass in the flat to Etienne, who broke a tackle and juked another defender and turned what should have been a loss into a 46-yard reception. The Tigers tacked on a 42-yard field goal from Potter and led 27-10 midway through the third quarter.

It didn’t take the Wahoos long to answer, and it was behind the play of Armstrong who broke off a 28-yard run on fourth down. That set up a 7-yard touchdown pass to Billy Kemp. With 6:05 to play in the third the Tigers led just 27-17.

The Tigers needed just six plays to march 65 yards to answer. A 26-yard pass to Frank Ladson and a 21-yard pass to Rodgers set up a four-yard scoring toss from Lawrence to Etienne, and Clemson led 34-17 late in the third quarter.

Two drives later the Cavaliers drove down to the Clemson 26, but Armstrong’s fourth-down pass was knocked down by Zanders and the Tigers took over on downs. The Tigers then marched 74 yards in just seven plays and got a two-yard scoring run from Chez Mellusi for a 41-17 lead late in the fourth quarter.

The Cavaliers added a late touchdown to account for the final score.

College GameDay's most recent visit to Clemson came in the 2019 season opener, when ESPN and ACC Network aired a special in-stadium Thursday night edition in advance of Clemson's 52-14 win against Georgia Tech. The upcoming broadcast will be Clemson's first time hosting the traditional Saturday morning show since 2016, prior to Clemson's classic 42-36 victory against No. 3 Louisville.