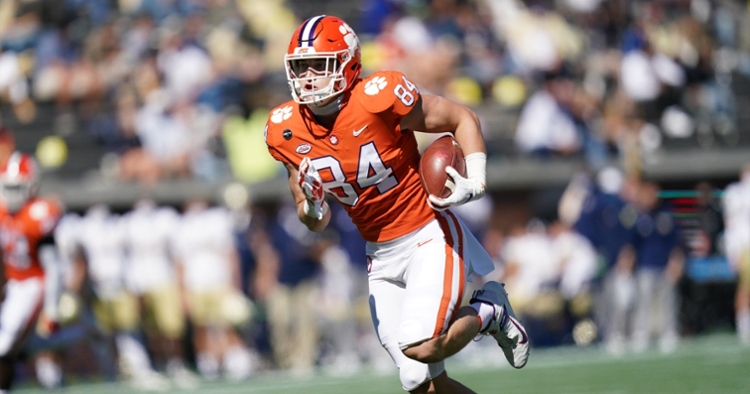 Davis Allen continues to impress as a receiver and a blocker. (ACC photo)

No. 1-ranked Clemson set whole new standards in a 73-7 win at Georgia Tech Saturday. We take a deeper look into the game with the help of Pro Football Focus:

The senior wide receiver out of Tennessee had one of his best days as a Tiger, catching six passes for a career-high 161 yards and two scores. As a result, he drew the highest offensive grade from PFF (91.5), just eclipsing teammate Trevor Lawrence (90.8). The grade was easily his highest of the season, streaking past the 73.8 he achieved at Wake Forest in the opener.

Ok, so maybe the quarterback spot should be reserved for Lawrence, who had that stellar grade and threw for career-highs in touchdowns (5) and yards (404). But Helms, the walk-on from West Columbia, saw his most extensive action of the season and led two scoring drives. He ended up with the fourth-highest grade (76.0). Backup DJ Uiagalelei is battling shoulder tightness, and Taisun Phommachanh exited the game with a hand injury, opening the door for Helms.

Allen continues to impress, and he earned the third-highest grade given out by PFF (78.4). Allen had three receptions for 67 yards and a touchdown, a 34-yarder from Lawrence in the second quarter that helped break the game wide open. It’s interesting to note that Allen is getting better each week, and posted his highest receiving grade of the season last week against Miami (73.1), and then topped that with a receiving grade of 79.3 against Georgia Tech.

Trevor with a beauty of a pitch fake and throw to Davis Allen for a 34-yd TD!

This year, Trevor Lawrence has slot man Amari Rodgers and tight ends Braden Galloway and Davis Allen using the middle of the field to perfection. Clemson was 5-for-6 around the line of scrimmage, 5-of-6 in the zero to 10-yard range, 4-for-5 from 10-20 yards and 1-5 in passes 20-plus yards. -- David Hood

Grading at 90.6 to lead Clemson’s starters, the senior safety posted his best mark since the Cotton Bowl win over Notre Dame in 2018 (91.9) with an interception and no completions allowed in two targets his way. His coverage graded at 90.1 over the game. He, Rodgers and Lawrence were on PFF's team of the week.

The freshman standout was next-best among starters (85.5) with a sack, a QB hit and a QB hurry, getting in on three total stops and a forced fumble over 24 snaps.

The highly-rated freshman played quadruple the snaps he had of any game this season and led the Tigers in grade (90.9), with three stops in his three tackles over 12 snaps. He graded 90 in rush defense.

* Clemson improved on a strong effort defensively versus No. 7 Miami with its second-best grade overall this season (84.7), earning the highest mark in coverage (86.1) with one pick and only 81 yards allowed. The coverage grade was a season-high as well, improving upon the previous-best set the week before (81.9).

* Georgia Tech’s playmakers in the run game were limited to 2.8 yards per carry and that was good enough for Clemson’s second-best rush defense grade this season (79.9; 92.6 vs. The Citadel the standard).

* PFF hadn’t graded special teams as of publishing time but it was a smooth day there for the Tigers after three blocked kicks the week before, with BT Potter hitting his lone attempt from 30 yards out and Will Spiers attempting as many passes as punts (3)

In a performance like that, the “downs” are not really even that down but even a touchdown didn’t bring Ladson above a 60 grade (59.4) with a drop and three catches in six targets for 21 yards. He graded 59.1 as a receiver.

Goodrich was burned for the one Georgia Tech touchdown of the game on a 59-yarder, where Clemson defensive coordinator Brent Venables said Goodrich didn’t play the route right and it wasn’t a missed assignment at the back. He played five snaps total and graded at 40.5 on the game.

In the category of "young player growing up," Lay saw his most snaps of the season but had his grade knocked down by a drop on a target that likely would’ve yielded a first down. He ended up with one catch in three targets for five yards and a 68.6 pass blocking grade but low marks in receiving (45.4) and overall grade (47.3). -- Brandon Rink