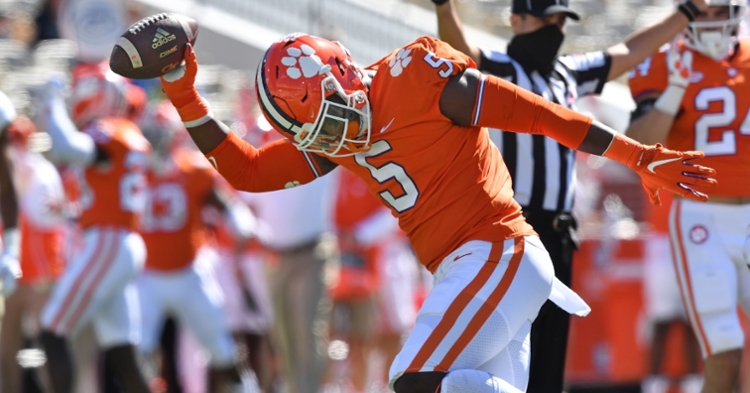 Georgia Tech kept the game close for two possessions, but after an opening-drive fumble, it was all Clemson the rest of the way. The Yellow Jackets have Atlanta's 404 area code on their shirts and the stadium turf, but on Saturday the 404 resembled a website error: 404 Not Found.

The 73 points is most Clemson has scored against Georgia Tech since the Tigers scored 73 in 73-0 win at Tech on this same date in 1903. John Heisman was Clemson coach that day. Heisman began his coaching career at Georgia Tech the following winter.

Clemson had 671 total yards of offense, 500 through the air and 71 on the ground. Georgia Tech finished with 204 total yards, 81 passing and 123 on the ground. Fifty-nine of Tech's passing yards came on their touchdown.

OFFENSIVE PLAYER OF THE GAME: Coming off a week when there was a lot of talk from the New York and Atlanta media about Trevor Lawrence, he proved why he will likely be the top pick in the 2021 NFL Draft. Lawrence was at the top of his game Saturday afternoon making all the throws asked of him and setting a new career high in just two quarters and a third quarter drive. Lawrence, a Georgia native, was 24-of-32 for 404 yards, five touchdowns and an interception

With the win, Trevor Lawrence improves to 30-1 as a starter, the fourth Clemson quarterback to achieve that feat. Tajh-Boyd, Charlie Whitehurst and Rodney Williams are all tied for the lead with 32 wins.

DEFENSIVE PLAYER OF THE GAME: Freshman Trenton Simpson saw his first extended action Saturday. The former 5-star from North Carolina saw early action and made his presence felt with big tackles. He ended the day with six tackles, four solo.

Cornerback Andrew Booth, Jr. had another stellar outing as he returned home to the Atlanta area. He finished the game with six total tackles, a tackle for loss and a sack.

STAT OF THE GAME: Clemson played four quarterbacks in the game, including walk-on Hunter Helms and starting punter Will Spiers. The only quarterback on the roster who didn’t see action was freshman D.J. Uiagalelei (shoulder).

*Tie game – Travis Etienne fumbled the ball on the opening possession, and it didn’t take the Jackets long to respond, with quarterbacks Jeff Sims hitting a wide-open Jamal Camp for a 59-yard scoring pass and it was tied at 7-7.

*Clemson the rest of the way – the Tigers then ran off the next 45 points over the rest of the half, and it started on the first play of the ensuing drive when Lawrence hit Amari Rodgers over the top for an 83-yard score and a 14-7 lead.

UP NEXT: Clemson returns to Death Valley to host Syracuse in another high-noon matchup. Syracuse lost to Liberty in the Carrier Dome Saturday afternoon.

The Yellow Jackets look to rebound at Boston College next week. The Eagles play at Virginia Tech Saturday night.