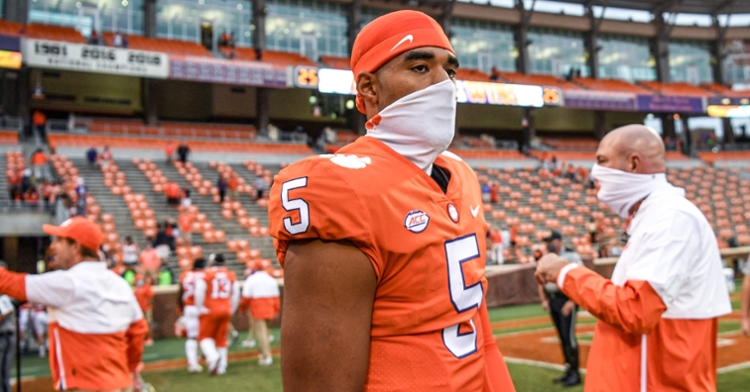 Uiagalelei will likely get his first start of his college career (Photo credit: ACC)

National news was made on Thursday night when it was announced that Clemson quarterback Trevor Lawrence tested positive for COVID-19 and would be out for Saturday's game with Boston College.

As Clemson says, next man up.

Former 5-star quarterback D.J. Uiagalelei will likely get the start on Saturday against an upset-minded Eagles squad.

"First and foremost, our prayers going out to Trevor for a speedy recovery, he's the leader of the team, and he's been a great mentor to DJ. All I'm going to say is this. I have Faith that my son is ready to step in and help his team win."

Also, he helped fans with the much-needed pronunciation (oo-ee-AHN-gah-leh-lay) of how to say their family's last name.

If your wondering how to say DJ’s last name, I was teaching a class on how to say our last name at the Abernathy...?????? pic.twitter.com/srhJjn1iah

???? A PSA on how to pronounce DJ Uiagalelei's name, from @DJUiagalelei himself pic.twitter.com/orKAXwkHw3