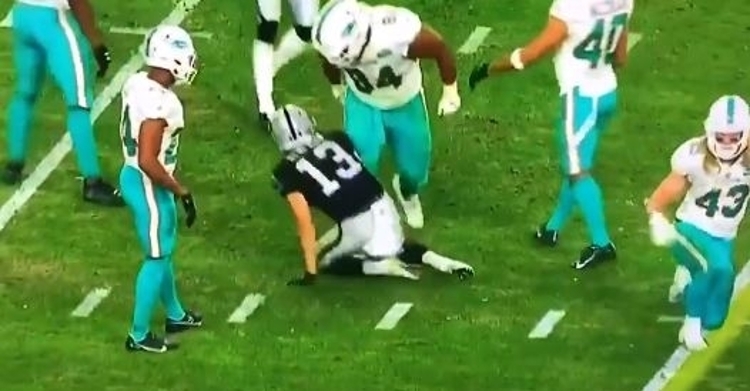 Wilkins and Renfrow are good friends

The Las Vegas Raiders lost a 26-25 heartbreaker to the Miami Dolphins on Saturday as they were officially eliminated from the playoff race after losing five of their last six games.

One bright spot for the Raiders was the play of former Clemson receiver Hunter Renfrow who showed his all-around play with five catches for 34 yards, five punt returns for 61 yards, and a touchdown-saving tackle on a fake punt.

For the season, Renfrow has 53 catches for 632 yards and two touchdowns. He became the fourth receiver in Raiders history to record 100 receptions combined in his first two seasons.

On one of Renfrow's catches, former teammate and defensive lineman Christian Wilkins helped tackle him and had a few choice words to his buddy.

Obviously, all in fun, as Wilkins and Renfrow are close friends. Wilkins was actually a groomsman in Renfrow's wedding last year.

Check out the fun play below:

When former Clemson star teammates collide, of course Christian Wilkins will have something to say to Hunter Renfrow pic.twitter.com/em6G7AhsXe

Mic @cwilkins42 up every week. He never disappoints!