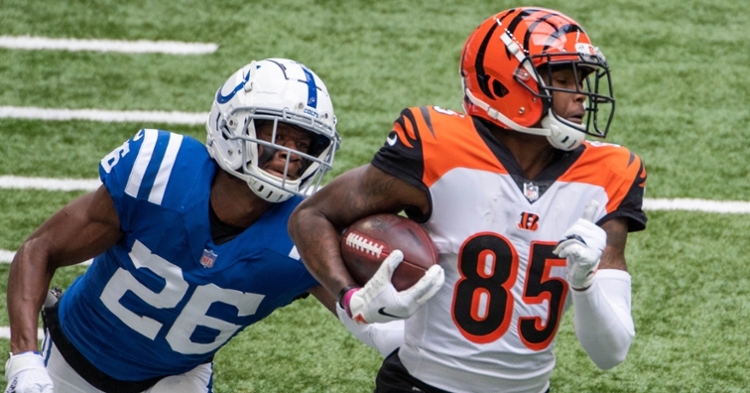 Two former Tigers -- one a first-round pick and one just outside it -- made the all-rookie team from Pro Football Focus this season.

"It became apparent early on that Higgins was going to quickly move ahead of (AJ) Green in the passing game," PFF's Ben Linsey writes, "and he proved to be the team’s top option in two areas where Green has historically excelled — downfield passes and red-zone work. Higgins earned a team-high nine receptions and six receiving touchdowns in the red zone this season, and he was the only player on Cincinnati to catch more than three passes thrown 20 or more yards downfield (nine).

"Higgins showed that he will be a key part of the Bengals’ offense moving forward as they continue building around (Joe) Burrow."

Tee Higgins was NOT dropping that ball??

Top-10 selection Isaiah Simmons earned the other nod from the former Tigers in Arizona.

"He has shown flashes of the kind of plays he can make in coverage — none bigger than the overtime interception against Russell Wilson and the Seahawks back in Week 7 — but he still hasn’t quite put it all together," Linsey said. "What Simmons was able to put on the field narrowly edged out other players who delivered solid performances in limited samples, like Willie Gay Jr. and Kamal Martin."