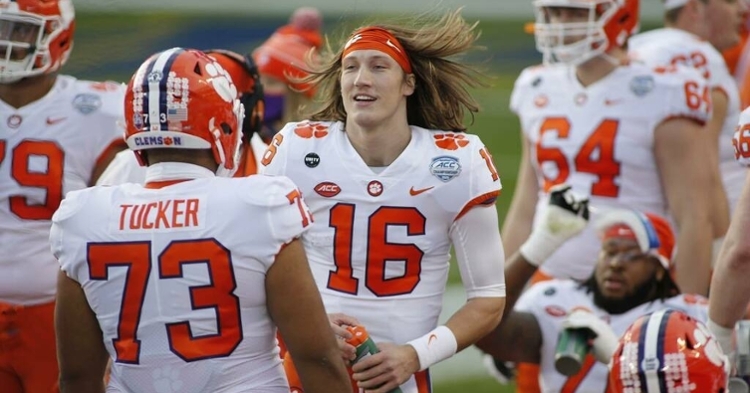 For the season, Lawrence threw for 3,153 yards and 24 touchdowns with only five interceptions.

Twitter was filled with reaction with the Heisman results including a ton of praise for Lawrence on another special season.

Check out some of the reaction below:

Congratulations on an incredible season, one-six!

The best is yet to come. #ALLIN pic.twitter.com/nJXiNVWp6v

I am proud of @trevorlawrencee for being named a @HeismanTrophy finalist. Not only is he an amazing athlete, but he is an outstanding leader and a wonderful person. #ALLIN

Only the beginning for Trevor Lawrence! pic.twitter.com/NgtwUYCMjR

If Trevor Lawrence plays the two games he missed due to COVID he wins it.

Congrats to DeVonta Smith on an absolutely spectacular season. I told my kids as we watched that all 4 of these finalists have stories worth rooting for. Bravo to all!

Tonight, the nation recognized @trevorlawrencee as one of its best football players. Congratulations, Trevor, on being a finalist for the @heismantrophy! We are proud of all the games you've won but more so how you've played, led and inspired during your time at Clemson. pic.twitter.com/TzEdWrGWa3

Remarkable year for a remarkable young man on and off the field. @Trevorlawrencee is one of the best to ever do it. The best is yet to come! https://t.co/X9xp8Ki8r9

If this is the end of Trevor Lawrence's career at Clemson, as we all expect it is, I'm incredibly grateful I got to cover him. A highlight of my career. He was a delight in media sessions and was always so steady. It was very cool to see him find his voice. The Jaguars are lucky.

Mac Jones finishes behind Trevor Lawrence for the heisman? We riot pic.twitter.com/dMYKcKuuuM

Just ordered my shirt commemorating all of the @ClemsonFB heisman trophy winners! Good prices online right now. Get them while they are hot! pic.twitter.com/TGfUpSzsJw

Still proud of the man and legacy of @Trevorlawrencee

Clemson Family and College Football Fans you should too https://t.co/A9XRhRmsdY