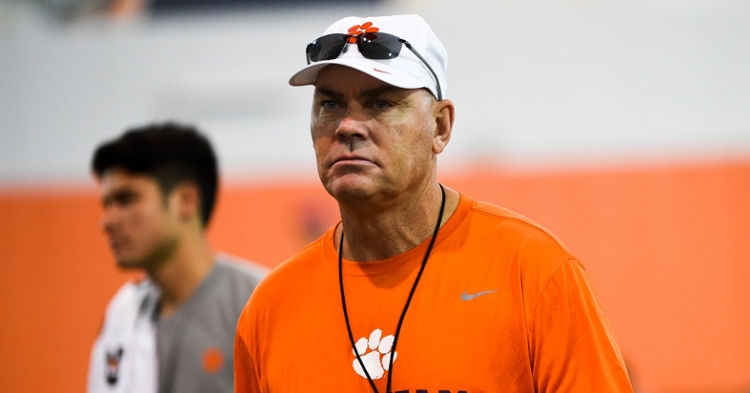 Pearman has served on Swinney's staff since 2009.

TigerNet has confirmed that Clemson's 2021 football staff will have some changes.

Tight ends coach and special teams coordinator Danny Pearman is set to move into an off-the-field role with Clemson, while now Hall of Fame running back C.J. Spiller is moving up from an unpaid role to running backs coach for the Tigers. That move for Spiller is still pending approval from the Board of Trustees on Feb. 4.

Offensive coordinator Tony Elliott is expected to transition into coaching the tight ends in Pearman's place.

Pearman has served the longest on Dabo Swinney's staff as an assistant, joining in 2009 from an assistant role with Maryland. Pearman was a graduate assistant with Clemson under Danny Ford and Ken Hatfield before coaching with Alabama while Swinney was there.

Spiller joined the coaching staff as an unpaid graduate assistant last August and filled in for Elliott in the Sugar Bowl when the coach was ruled out for a COVID-19 positive test.

Additional staff changes we are hearing could take place include Andrew Zow (reported last week) taking over Chansi Stuckey's role as an offensive player analyst. Zow, a former quarterback at Alabama, is making the move from head coach in high school to the Tigers. Former offensive analyst Kyle Richardson, who was an offensive analyst before moving into Brad Scott's old role of Director of Football Player Development & Freshman Transition last year, could be taking more of a prominent role. Thad Turnipseed, the longtime Director of Football Projects & External Affairs, is believed to be moving into Richardson's role.

The staff shake-up was first reported by Tiger Illustrated.

Clemson's plan is to move Danny Pearman into a scouting role that will include both self-scouting and transfer portal evaluations. This is significant because Dabo Swinney has historically not wanted to recruit the portal. He's showing he's willing to move with CFB as it changes.