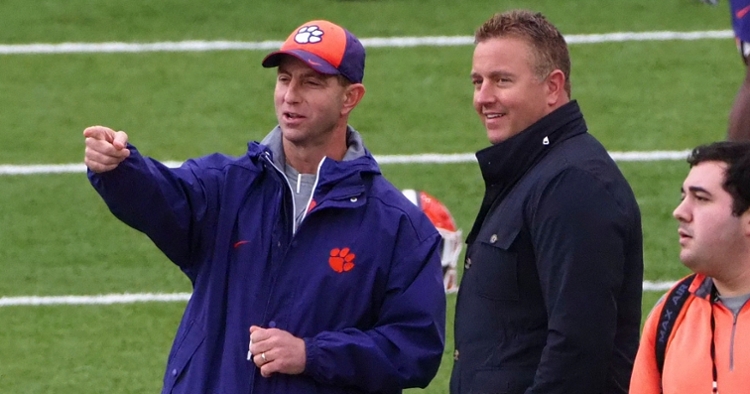 ESPN commentator Kirk Herbstreit knows Swinney well as two of his sons play for the Tigers, and he had the following reaction on ESPN's College Football podcast.

"I can't wait for the two teams to get together whether it's this year or in the future," he said. "Dabo clearly was upset. I don't understand all of the protocols. I have a hard enough time keeping up with all the different conferences and the different rules of the local health departments. So I guess Florida State's issue was with a (Clemson) player that had some symptoms throughout the week that was testing negative and finally tested positive on Friday and by then, they had already headed to Tallahassee."

FSU was worried about the positive test.

"So Florida State, I guess, felt, 'Well, there's no way to really know this player, who he's been around, who he's potentially affected by that potential virus spreading.' And they didn't want their players to be around that, I guess, is what I understand.

"And Dabo's saying, 'Players test positive day of all the time," he said. "What's the big deal? You sit him down, and whoever's been in contact tracing with that player, you move on and play.' And we have seen that throughout the country, where you expect a certain player to be on the field and then he's not. Davis Mills, the starting quarterback at Stanford, we were getting ready to do the Stanford-Oregon game, and a few hours before the game, 'Oh, well, he tested positive, him and his roommate were out.' And Stanford played their backup quarterback. So we see it all the time. It's just a little bit — there's maybe more to it than we realize."

Herbstreit thinks that the rivalry between Clemson and Florida State just got kicked up a notch after all of this.

"All I know is Dabo was heated, he didn't hide his emotions and feelings, and Florida State used to be the Clemson of the ACC, and now there's a new sheriff in town, and you've got a new head coach in Tallahassee who's trying to create a new culture and this kind of adds to the spice of what's already, I feel like, a pretty good natural rivalry," he said. "And I don't know if they're going to play this year. I have no idea if it'll work out. But sign me up. Can't wait to watch."

Agreed as the Clemson-FSU game should be a must-watch in the next few years.