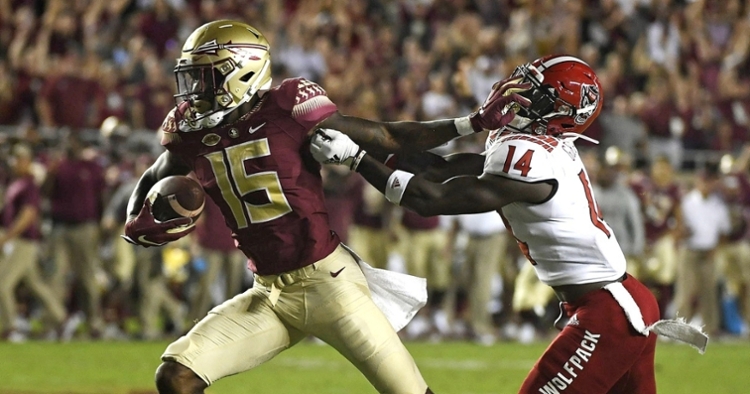 Terry was among two preseason All-ACC players on FSU to be announced as out for the season. (Photo: Melina Myers / USATODAY)

A wave of bad news for the Seminoles came out of a press conference on Wednesday -- a week and a half out from their date with the No. 4 Tigers in Tallahassee (Nov. 21).

Norvell also said that preseason first-team All-ACC receiver Tamorrion Terry is no longer with the program. He led the Seminoles with 23 catches for 289 yards and a touchdown and had missed action lately due to a knee injury.

Terry finishes an accomplished Seminoles career with 2,221 receiving yards and 18 scores over the last three seasons.

On the offensive line, offensive tackle starter Devontay Taylor is also done for the season with an apparent knee injury from their most recent game against Pittsburgh. Taylor was a redshirt senior who transferred from FIU, who had been FSU's leading grader on the offensive line and third-best overall on the offense according to Pro Football Focus (72.9).

The Seminoles play at NC State this Saturday at 7:30 p.m. on ACC Network.