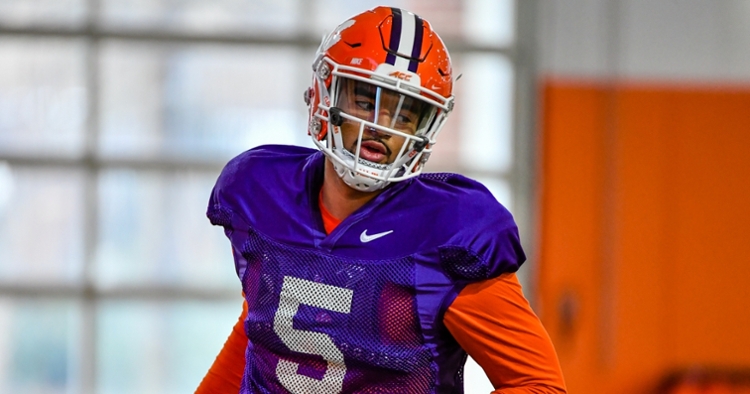 Clemson backup quarterback D.J. Uiagalelei didn't get reps after Trevor Lawrence was substituted in the third quarter of the blowout against Georgia Tech on Saturday.

According to the Clemson broadcast, Uiagalelei didn't get any game action because he suffered some shoulder tightness this week at practice.

Obviously, it was the smart move to rest him as the Tigers didn't need him with their offensive explosion today.

Tony Elliott said the following about Uiagalelei during the media availability in postgame.

"Decided to hold him, let Taisun get some work. That was the biggest decision there."

Dabo Swinney said that Uiagalelei was sore and they decided to hold him.

"We played everybody. The only guy that didn’t play was DJ Uiagalelei," he said. "He was available but we were going to try to not play him because he was still a little sore. So we didn’t want to play him unless we just had to."

Swinney didn't want to get into the details of the injury.

"I’m not going to get in the specifics of anything," he said. "Other than he just was sore. He got beat up a little bit in the game last week. We just wanted to hold him. That’s going to be a blessing for him getting back going. He practiced all week but just limited."

For the season, Uiagalelei is 11-for-16 passing for 91 passing yards. He also has 32 rushing yards and two rushing touchdowns on the ground.

Taisun Phommachanh, walk-on quarterback Hunter Helms, and punter Will Spiers got all the reps at quarterback after Lawrence was subbed out.