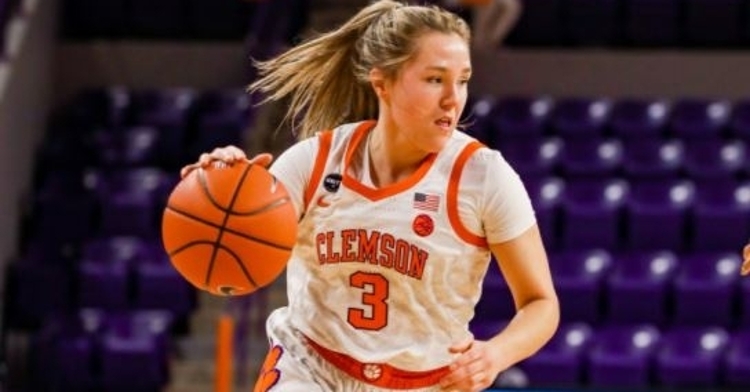 CLEMSON, S.C. — Clemson came out on the losing end of a matchup with North Carolina on Thursday. The Tar Heels pulled off a road win by defeating the Tigers 77-64 at Littlejohn Coliseum.

Delicia Washington led Clemson in scoring with 15 points. She also tallied six assists, four rebounds and two steals. Mikayla Hayes, who shot 5-for-7 from the floor, and Kendall Spray scored 11 points apiece. In addition, Spray pulled down six boards and was credited with a pair of steals. Amari Robinson corralled a team-best seven rebounds. For North Carolina, Stephanie Watts scored a game-high 26 points.

A competitive first quarter ended with the Tar Heels clinging to a 17-16 lead. After receiving a feed from Hannah Hank, Spray poured in a go-ahead 3-pointer at the 5:38 mark, placing Clemson up 11-10. Hayes beat the buzzer via a three of her own at the end of the quarter, with Washington assisting on the basket. UNC outscored Clemson 19-8 in the second quarter and took a 36-24 advantage into the intermission.

With just under seven minutes remaining in the third quarter, Weronika Hipp ended a North Carolina run by way of a trey. She proceeded to knock down another shot from beyond the arc a few possessions later. The Tar Heels maintained their comfortable lead throughout the period, and the Tigers entered the fourth quarter trailing 62-41. Clemson put up a fight in the final period, though, outscoring North Carolina 23-15. In the end, the Tar Heels won 77-64.

The Tigers will remain home for their next bout on Thursday, Feb. 25. Clemson is set to host the Virginia Tech Hokies (11-7, 6-7) at Littlejohn. The contest, which is scheduled to tip off at 6 p.m., can be watched on ACC Network.

"This was a really disappointing defensive effort coupled with too many turnovers. We didn't take care of the basketball. North Carolina has a very good transition offense, and we didn't do a good job on transition defense. It was a combination of a lot of things that didn't go our way. You have to give North Carolina credit for dictating the game."

"She's done a really good job of playing consistently well throughout the conference schedule. We need her to be a better defender early in the game, though, and I know that she will be."

Dabo Swinney on his philosophy with the transfer portal
Post your comments!