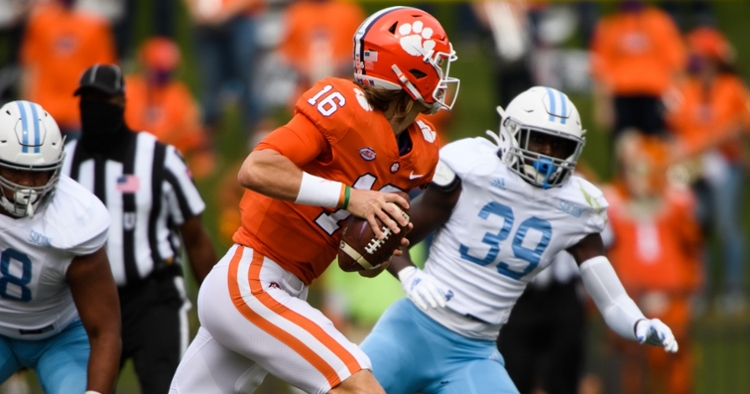 Lawrence looks for an open receiver Saturday. (Photo per ACC)

CAPTION
The Clemson Tigers put on a show Saturday afternoon as they defeated The Citadel 49-0 in Death Valley. One of the stars of the show was junior quarterback Trevor Lawrence, who completed eight of nine passes for 168 yards and three touchdowns while also rushing for a touchdown. And that was only in one half of football.

In terms of efficiency, this may have been one of Lawrence’s best performances in his career for the Tigers.

“That might’ve been my most efficient day since I’ve been here, but it was just fun,” Lawrence said. “I think we executed really well. It’s been good to have two games now where we have taken care of business.”

Last year, the Clemson quarterback got off to a slower start and most of the nation took notice. Fast forward to this year and Lawrence looks like he is already in midseason form. Most of that is credit to his focus and mindset heading into what is his last season for the Tigers.

“I think every year is different, but I just think my mindset and my focus level and the little details of the game are a lot better than they were. I think I have gotten a lot smarter but I’ve also simplified the game,” Lawrence said.

While Lawrence looked like the first overall pick on Saturday, the wide receivers also did their part on the day. The Tigers lost two key wideouts over the offseason in Tee Higgins and Justyn Ross but the receivers have really worked well together to be better.

“We are really diverse. We’ve got some really good tight ends that can block, run, and catch the ball,” Lawrence said. “We’ve got a lot of depth and a lot of young guys who are starting to play better and better.”

Clemson took the field for the first time in Death Valley on what is going to be an unusual year, but to be home is special. The crowd at the game Saturday showed how special Clemson is.

“The atmosphere was really cool. To see how other places have been doing it and how we did it, I think there is no better place in the country as far as what’s going on right now, they did a great job making the atmosphere as normal as possible,” Lawrence said.

Trevor Lawrence and Clemson are only two games into the season, but they look like they are already in midseason form. And that is scary news for any team that steps into their path over the next few weeks.