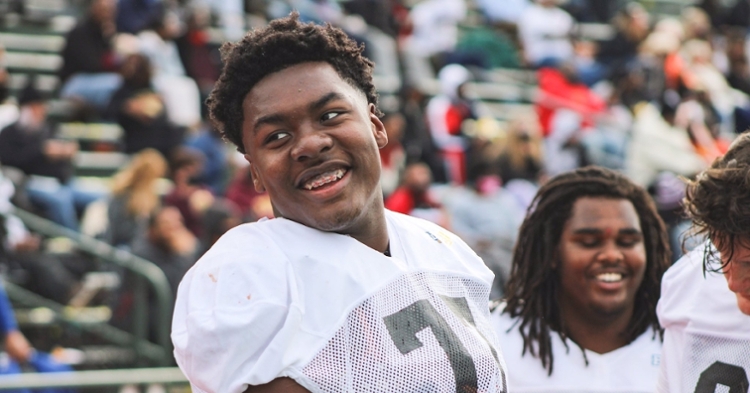 Clemson has become a popular destination for elite defensive line prospects, and the Tigers are once again in a position to land one of the top defensive linemen in the 2022 class.

Mykel Williams released a top-10 on January 1st, with Clemson in a group that includes Alabama, Arizona State, Georgia, Georgia Tech, Kentucky, LSU, Ohio State, Penn State, and USC. The 6-5, 258-pound 4-star from Columbus (GA) is ranked as the No. 41 player overall in the 247Sports Composite rankings and the No. 5 player in the state of Georgia. Williams picked up the Clemson offer on June 1st, and the Tigers have remained a major player in Williams’ recruitment.

Williams’ Clemson recruitment has been handled by defensive ends coach Lemanski Hall. Williams has the strength and speed to contribute all across the defensive line, and the Clemson staff likes what they see from Williams at defensive end.

“(Hall) said he loved my film and he can’t wait to get me on campus,” Williams told TigerNet. “I talk with coach Hall every week. It’s been really good, just getting to know each other. He likes how knowledgeable I am, my get-off, and how I play. He said that I can come in and compete for a starting spot.”

Williams has played defensive tackle, end, and outside linebacker at the high school level. That versatility has been a big reason why Williams has reeled in over 25 offers.

“How well I play with my hands, and how I could be 245-260 pounds and blow by linemen with speed and still come with power,” Williams said of his strengths on the field. “And my work ethic. As a player, I’m a hardworking and humble dude who is going to come in and make a program better.”

Williams said that he feels like he generally fits best in a 4-3 defense on the end, and Clemson feels like it could be a good fit for him. What else does Williams like about the Clemson program?

“I know as of right now they have the best facilities and they have a great defensive line coach,” he said. “I hear that it’s a great place to learn and they have a family atmosphere. They are all great coaches. I want to learn more about their history.”

Williams said that his father, John Johnson, is a big part of his life and his recruitment. Moving forward, what will Williams and his family be looking for in a school to call home?

“See, that’s where business comes in,” Williams said. “I’ve got to visit the campus or do a virtual visit and see where I fit the best at. When I visit, it will feel like no other. And if I go there, will I be able to play and how will they help me after I leave or after the league.”

Williams has accepted an invite to play in the 2022 Adidas All-American Bowl, a prestigious honor for the top high school players in the nation. Williams was also named the MVP of the Georgia Elite All-Star game and the 2020 Bi-City Defensive Player of the Year. Williams wrapped up his junior season with 69 total tackles, 17 sacks, 19 tackles for loss, and 5 forced fumbles.

Where should I go ??? pic.twitter.com/cXD7oWRo80