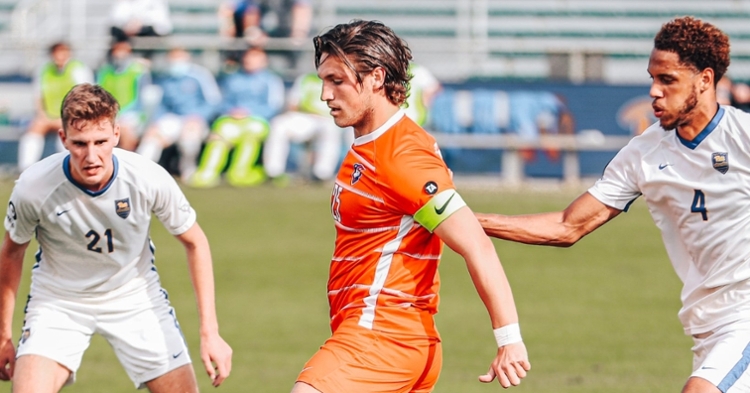 Brighton looks for room during the win over Pitt. (Photo courtesy of CU Athletics)

Clemson men’s soccer coach Mike Noonan kept his team looking forward all year, guiding them through the pitfalls and trials of a pandemic and a season that was far from normal, and it all paid off Sunday.

Behind goals from Mohamed Seye and James Brighton, No. 2 Clemson won its 15th ACC Championship on Sunday, 2-1, against the nation’s No. 1-ranked team, the Pittsburgh Panthers. The win marked Noonan’s second title of his tenure at Clemson and gave the Tigers their fourth ACC Tournament championship, second-most among current members of the conference and first since 2014.

Noonan said everyone involved in the program made the sacrifices necessary to win a championship.

“I am grateful for the opportunity to work with a bunch of great guys,” Noonan said after the win. “We had to manage some things a little bit differently this year and I take my hat off to the sacrifices, in addition to the ones they usually make, that our players had to make for this year to come off.”

In the game’s 13th minute, Seye snuck a ball past the Pitt goalkeeper on an assist from Callum Johnson to get the Tigers on the board first. It was the 2,800th goal in program history and marked the first time the Panthers trailed in a game this season.

Pitt netted the equalizer just over a minute into the second half, and it would have been easy for the Tigers to look back at last year’s ACC Championship when Virginia scored three times in the second half to knock off the then top-ranked Tigers.

“Maybe I compartmentalize too well, but last year never entered my lexicon throughout the entire game,” Noonan said. “It was about this game and being in the precious present and our team stayed that way. I think the way we re-took control of the game, you can tell the resilience of our team because they stayed there as well. It's natural in sport to look back, but Dabo Swinney came and talked to our team a year ago, and one of the things that stuck with our team was that we don't look through the rearview mirror, we look through the windshield and what is next. I think our guys did a great job of that.”

In the 71st minute, Brighton’s 10th career goal gave the Tigers a 2-1 lead on an assist from Grayson Barber, who tied the ACC record for most assists in a tournament (4). Barber, moving the ball down the left side of the field, lobbed a perfect pass to Brighton for the header into the far post.

Noonan credited Barber with having all the tools to be successful at the forward spot.

“I tell you what, he is the Energizer Bunny. He is a player that continues to get better and better,” Noonan said. “He is so dangerous because he can come inside, he can play on the left, he can play on the right, and is quality in terms of passing. When you look at forwards - everyone thinks about scoring and scoring - if you can find a good passing forward who can also score you have a really good player on your hands. And that is Grayson Barber.”

Brighton said the winning goal was set up by great coaching.

"We did a good job of getting out of the back, and that is all credit to the coaching staff," Brighton said. "We had in the scouting report that the center backs drift wide when the ball is wide. I knew that he would drift over and I tried to get on his left shoulder, and that was all Grayson Barber hitting an excellent cross and that made my job pretty easy. That was a preparation goal, we worked at it all week. We knew the tendencies of the backs and that was just executing what we studied during the week.”

Brighton then said the team is full of fighters who would accept nothing less than an ACC Championship.

“It's amazing. At the start of the year, we set out to be the best team ever in the ACC during a pandemic. We accomplished that,” Brighton said. “It took us a long time and we had a lot of hardships. COVID ruined a lot of things for us this season and I am really proud of this group. We are full of fighters and competitors and winners and it all came to a peak today. It was a struggle but we dealt with it the best we could and that got us here.

"The reason you come to a school like Clemson is to win trophies. We had talked before the season about what we wanted to do, and we knew this was a huge championship and we wanted to strive to win it because we didn't last year. Our whole goal was to get back here and come out with a different result. It was a lot of work but we never questioned in our minds that we were going to come and play for this."

Clemson wins over No. 1

•Clemson’s 2-1 win over #1 ranked Pittsburgh Sunday was the school’s 10th win over the #1 team in men’s soccer history. It was the program’s second win over #1 this year, as the Tigers defeated #1 Wake Forest back on Oct. 13, 2020. It is first Clemson program to have two wins over #1 in same year since baseball team beat #1 Florida State team three times in 2012.

•This was Clemson’s 37th all-time win over the number-one team in any sport. Baseball has the most with 17, followed by men’s soccer’s 10. Men’s Basketball, football, women’s basketball and men’s tennis have two apiece and women’s soccer and women’s tennis each have one.

James Brighton slots home his second goal of the ACC Tournament to give us a 2-1 lead with less than 2??0?? to play!#ClemsonUnited
??- https://t.co/hvz3SubkJV
??- https://t.co/WpTDj7oYhS pic.twitter.com/fCoJFm6WYB