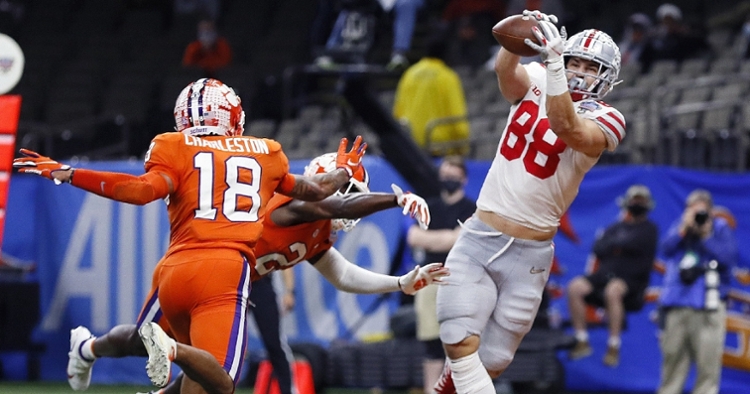 The Buckeyes score a first-half touchdown against the secondary. (Photo: Kylerobertson / USATODAY)

Ohio State got the revenge it wanted and got it in a big way.

The No. 3 Buckeyes overcame an early 14-7 deficit and went on a 28-0 first-half run that stunned No. 2 Clemson en route to a 49-28 dominating victory in the Sugar Bowl Friday night. Ohio State advances to play No. 1 Alabama in the National Championship in Miami on Jan. 11th.

Clemson finishes the season 10-2, while Ohio State is now 7-0 heading into the game against the Crimson Tide.

Clemson looked dominant early offensively but failed to pick up a first down the rest of the first half after the 5:01 mark of the first quarter as the Buckeyes went on an offensive rampage.

The Buckeyes rolled up 639 total yards of offense, the second-most ever against a Brent Venables' defense (667, FSU in 2012). LSU had 628 in the title game last season. Trevor Lawrence was harassed all night and finished 33-for-48 for 400 yards and two touchdowns. In the final game of his Clemson career, Travis Etienne had just 10 carries for 32 yards. He did add 64 yards on four receptions.

Cornell Powell led the Tigers with eight receptions for 139 yards and two touchdowns. Ohio St.'s Trey Sermon ran the ball 30 times for 191 yards, while Justin Fields was 22-for-28 for 385 yards and a Sugar Bowl-record six touchdown passes.

“And I think they had five straight touchdowns and just really couldn't respond like we needed to," Swinney said. "Had a chance there in the third quarter,” he said. “We got the score. Got the interception, got the score, cut it to two scores. So maybe if we could get one more stop and that was kind of our get one more stop, score again, now you've got a one-score game going into the fourth quarter. But it just wasn't to be.

“And, again, the credit goes to Ohio State. They just absolutely dominated the game. You've got to give them credit for that. They were the better team, and they earned it. But very disappointed, certainly, in how we performed. Not what any of us expected. But, again, congratulations to Ohio State.”

Swinney said the Tigers will grow from the loss.

“On a positive note, I will say this, we win and lose as a team around here and we'll grow from it. It's a hurting locker room in there. It's a hurting locker room. We haven't lost many games around here in a long time, and this one hurt,” Swinney said. “And this was an opportunity to go play for a national championship, and we didn't get it done.

Ohio State won the toss and elected to defer and the Tigers made them pay. The Tigers put together an eight-play, 82-yard drive that ended with a score. The big play on the drive was a third-down pass that covered 27 yards and gave the Tigers a first down at the five. Two plays later, Lawrence outran the defenders to the endzone on a two-yard touchdown run and Clemson led 7-0 early.

The teams traded punts before Ohio State answered in a big way. The Buckeyes drove into Clemson territory caught the Clemson defense overloaded on the right side, allowing Trey Sermon to sprint 32 yards for the tying score.

Clemson responded on the ensuing possession. Lawrence completed a 15-yard pass to Braden Galloway, a 16-yard pass to Amari Rodgers and a 16-yard pass to Etienne. Lyn-J Dixon followed with a 15-yard run and Etienne capped the drive with a three-yard scoring run. With just over five minutes left in the first quarter, Clemson led 14-7.

The back-and-forth continued. Clemson cornerback Derion Kendrick got beat on a 47-yard pass from Justin Fields to Garrett Mitchell, and Kendrick gave up an eight-yard scoring toss to Luke Farrell that tied the score at 14-14 late in the first quarter.

Clemson sputtered offensively and was forced to punt and Ohio State continued to pick apart the Clemson defense, using chunk plays to move down the field with ease. The drive ended on a 17-yard pass from Fields to Jeremy Ruckert – who was wide open – and the Buckeyes held a 21-14 lead.

Clemson was forced into another punt and the Buckeyes' offense kept rolling. The biggest play of the drive occurred on third down in the red zone when Fields escaped the pocket and was stopped by middle linebacker James Skalski short of the first down. Fields was injured on the play after taking Skalski’s helmet to the kidney, and Skalski was tossed for targeting. Two plays later, Fields threw a 9-yard touchdown pass to Olave, and Ohio State led 28-14 late in the first half.

Clemson’s offense failed to get a first down again, and again the Buckeyes drove down the field with Fields hitting Ruckert over the middle for a 12-yard scoring toss. With just a few seconds left in the half, Ohio State led 35-14.

The Buckeyes threatened to put the game out of reach on the first drive of the second half, reaching the Clemson 12 in six plays. However, Fields had a pass deflected by Myles Murphy and it was intercepted by Mike Jones in the end zone, ending the promising drive.

Clemson and Lawrence took advantage of the turnover, with a 29-yard pass to Powell setting up a 10-yard Powell touchdown reception. Midway through the third quarter Ohio State led 35-21. Clemson had a chance to stop the Buckeyes deep in their own territory, but Fields converted a long third-down pass to Sermon that helped set up a 56-yard bomb to Olave for the score. With 4:55 left in the third quarter Ohio State was back ahead by three touchdowns at 42-21.

The Tigers then saw Lawrence fumble the ball away to kill one drive, and saw Matt Bockhorst move on fourth-and-short on the next drive to force a punt, and Ohio State went in for the kill. Fields hit Williams on a 45-yard score and the rout was on as Ohio State led 49-21.

The Tigers added a 26-yard touchdown pass from Lawrence to Powell to account for the final points.