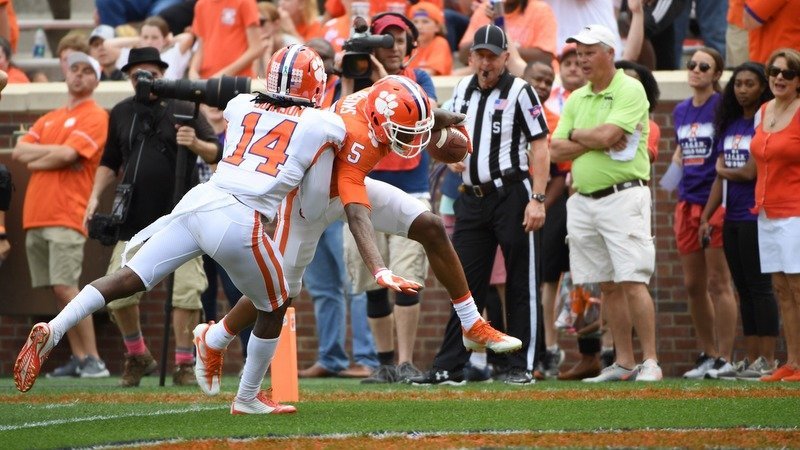 CLEMSON – Clemson held the annual Orange and White Game Saturday afternoon in Death Valley in front of a large and solidly orange crowd.

Here are some quick observations from each half. The Orange defeated the White 28-17.

Lawrence settled in and didn’t lead any more scoring drives in the first half, but showed a nice grasp of the offense. He also wasn’t afraid to throw to his check-down receivers.

Hunter Johnson also led a first half scoring drive, hitting Higgins from 18 yards out. Higgins had four catches for 118 yards and proved he can be the guy on the outside.

*Starter Kelly Bryant looked frustrated for much of the first half. He overthrew some receivers on the first drive and he didn’t look comfortable on the sideline. All five of his first half drives were three-and-outs.

*Bryant took each of the first three drives, but Chase Brice led the White to two scoring drives in the half. Brice threw an interception down the left sideline – he forgot about the safety in the middle of the field and it was an easy pick – but he was good otherwise.

*Clemson’s defensive line is going to be good. Really good. Understatement, right? We knew that, right? Christian Wilkins and Clelin Ferrell didn’t have to show out in a meaningless spring game, but both played like they were in the College Football Playoff. Other linemen who stood out early were Xavier Kelly and Justin Foster.

*Jamie Skalski had his name mentioned a lot. Don’t count him out of the linebacker competition.

*We saw Amari Rodgers on a few returns. I wrote a few weeks ago that he is going to be a weapon on returns, and I still believe that. He has everything it takes to be a force.

*My eyes were drawn to linebacker Shaq Smith – meet one of your new team leaders. He has the “IT” factor you look for.

*Greg Huegel was brought out for four field goal attempts, and hit his first two before hitting the goalpost from 47 yards out on this third attempt. His fourth went wide left, but he drew cheers from the crowd and both sidelines emptied to cheer him on. I’ve never seen a kicker kick with a big knee brace, but he pulled it off.

A name we didn’t hear a bunch in the first half, Xavier Thomas, sacked Brice early in the second half. He used a sweet swim move to get there, and then turned for head coach Dabo Swinney to acknowledge the pay. Swinney was doing an interview and didn’t notice, so Thomas threw his arms in the air.

*A Wilkins “sack” negated a 60-something yard from Lawrence to Higgins. Swinney blew the play dead after the throw, and Wilkins waved for all of the players to come back to his side of the field. The fans engaged in good-natured booing.

*Johnson came through with another scoring drive, leading the Orange on an eight-play drive that ended with a three-yard scoring run.

*KJ Henry got in on the action with sack of Johnson early in the fourth quarter. Henry showed good speed on the play. Thomas blew past the tackle on the next series and accounted for his second sack. He was in front of Brice before Brice had a chance to read the receivers.

*On the offensive line, Blake Vinson was a pleasant surprise for me. He’s versatile and can play guard if needed. Cade Stewart is another one that we’ve heard about this spring and he looked good. I really wanted to see Sean Pollard at guard. He looks more and more comfortable every time I see him, and he’s going to surprise people this season. Also – keep an eye on Matt Bockhorst. This line is going to have incredible depth this season.

*Trayvon Mullen stepped in front of Brice pass and raced 84 yards to the endzone for a pick-six. Brice can’t make that throw there.

Brice answered on the next drive, throwing a dart over the middle to Diondre Overton that Overton took 50 yards for a touchdown. The pass had zip and was on the money.