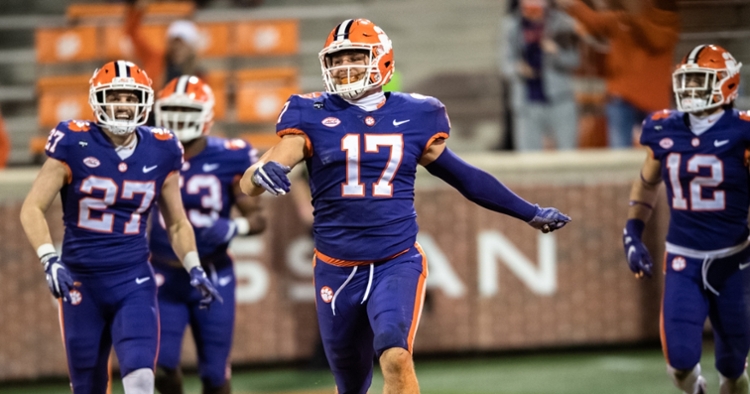 Patterson had averaged eight snaps a game before stepping into a big role at VT. (ACC photo)

Kane Patterson has been ready for his moment.

Not a full quarter into the action at Virginia Tech last weekend, that chance came for the sophomore linebacker, as starter James Skalski and backup Jake Venables both went out due to injury.

After averaging eight snaps over the first nine games, the Nashville-area product stepped into the middle for Brent Venables’ defense and played a career-high 31 plays in the 45-10 win over the Hokies.

“I graded out pretty well. I was up there with Baylon (Spector) and Mike (Jones Jr.), which felt pretty good -- just because they've been starting all season,” Patterson said this week. “And I know that's a lot more snaps than I've gotten in all the other games and in any game since I've been here, but for me, it wasn't anything I was ready for.”

Patterson had to stay patient.

“Like anyone who comes to Clemson, they're the big dog in their high school or state or whatever so everybody is just expecting to play and then they get here and sometimes you've got to be patient,” Patterson said, “and it's also very important to be prepared when that time comes and for me just being around Jamie (Skalski) and being around Jake and seeing how they prepare for the games each week and what film they watch, what they look at in each team and the details and then how hard they work out in the weight room and how they practice and how hard they practice. The way they communicate during the practice.

“I've just been able to see both of them what it looks like and Jamie has just been extra good to me by taking extra care of me and always making sure and helping me learn the defense better and getting my details right and helping me prepare. Going into this week and every week this season, I have been preparing like I'm a starter myself. So just when my chance came, I was going to be ready.”

Fellow second-year linebackers Keith Maguire and LaVonta Bentley got their chance and performed under the lights as well. Maguire graded the best out of the Clemson defenders over 19 snaps per Pro Football Focus, tallying five tackles (2 for loss) with a forced fumble, and Bentley posted 1.5 sacks and four tackles.

“Got to give credit to Coach V for how hard he works and makes sure we're prepared -- just us as a linebacker corps we're always in the film room together,” Maguire said of his class standing out. “Always trying to get better as a group. I think it showed this Saturday in the game that we all push each other to be better and it's been showing up in games.”

While the offseason schedule was different in 2020, Patterson says they benefited from more access to coaches, even if it was more virtual.

“I've grown a lot just in my knowledge every week. You're either moving forward or moving backward and I'd say every week I'm just getting smarter and starting to know it better and better,” said Patterson. “Last fall was just kinda learning as much as I could on the go. It was just pretty quick. In the spring I had a little bit more time to go into details and then all of our Zoom calls we got to go into details of the defense and really learn a lot of things I didn't get to learn last fall. And then this fall it's really started to come together and I've really gained confidence about our defense. “

Maguire says they have learned to always prepare like a starter, but this year has brought an extra emphasis.

“Every week, we work extra hard preparing no matter what happens,” he said. “We do that just in case something like that happens. A few linebackers go down and you've got to be ready and you're expected to perform as well as the starters, so every week just bringing that sense of urgency and being prepared in case our number is called.

“Definitely this year because you never know if someone is gonna test positive (for COVID) or contact tracing or something like that. Every year (it's like that) but this year especially you've got to be more focused and ready to go in whenever you need to.”