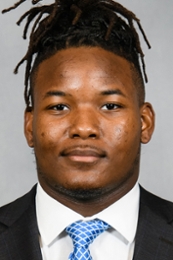 Linebacker
B I O
Enters 2020 credited with six tackles in 10 defensive snaps across four games while redshirting in 2019.


Before Clemson: Ranked as the No. 119 overall player in the nation by PrepStar … rated as the No. 177 overall player by Rivals.com, who also sees him as the ninth-best inside linebacker and eighth-best player from Alabama … four-star by PrepStar, ESPN and Rivals … ESPN rated him as the No. 289 overall player in the nation, the seventh-best inside linebacker and 12th-best player in Alabama … had strong senior year with 118 tackles, 16 tackles for loss, 5.5 sacks, four passes broken up … ranked as No. 6 player in Alabama by Al.com … Lineman of the Year by the Birmingham Quarterback Club … named Defensive Player of the Year in Birmingham … Played high school football at Jackson-Olin High for coach Tim Vakakes … Clemson recruiter was Todd Bates … committed to Clemson on July 27, 2018.