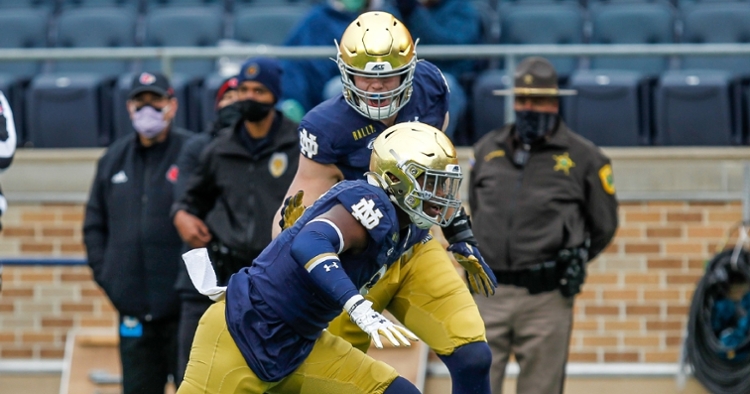 The game of the year has finally arrived. The Clemson Tigers travel to South Bend on Saturday to face 6-0 Notre Dame. To give us an inside perspective on the Fighting Irish, I connected with Bryan Driskell from Irish Breakdown.

Ryan Kantor: The Irish are 6-0 (5-0) in their first season as a full member of the ACC. How has the race for an ACC Championship Game berth impacted your outlook on the season? Obviously, dropping Navy, Wisconsin, Stanford, and USC from the schedule is far from ideal, but how has this season as a conference member been received overall?

Bryan Driskell: It has certainly changed how I scoreboard watch each week. In the past, you focus on USC and then teams that are contending for the national title. Now, Notre Dame fans get a chance to focus on ACC standings, and they get to enjoy how certain games impact the opportunity to play for the ACC title.

It has also given Irish fans a bit more to think about once they lose. When Notre Dame lost to Georgia last season it was, “Well, the season is over, no national title.” Now, if Notre Dame does lose to Clemson on Saturday the Irish can still control their destiny a bit more because if they handle business against Boston College, North Carolina, Syracuse and Wake Forest they can get a rematch against Clemson in hopes of winning a league title and then getting a playoff berth.

Kantor: The big news for this game is that Clemson will be without QB Trevor Lawrence (COVID-19 protocol). QB DJ Uiagalelei performed well against Boston College but losing the Heisman front-runner still stings. How does his absence change your expectations for the game? Does his absence make it feel like more of a must-win with the thinking that if you lose to Clemson in South Bend without Lawrence, getting revenge in Charlotte when the Tigers have Lawrence seems unlikely?

Driskell: Lawrence being out has made this a far more important game for Notre Dame. If you can’t beat Clemson, at home, without Trevor Lawrence, then the program will get absolutely hammered. Then what is there to look forward to, a rematch on Dec. 19 with Lawrence? Notre Dame cannot afford to lose this game if it wants to be considered a truly premier program for what it does on the field.

If Notre Dame can beat Clemson on Saturday and then be competitive in an ACC title game loss (let’s say Clemson scores late to win), then they will have a legitimate case to make for the fourth playoff berth. Lose this game and the Irish are in a situation where it absolutely must beat Clemson on Dec. 19 with Lawrence in the lineup.

Kantor: TE Cole Kmet (43rd) and WR Chase Claypool (49th) were selected in the second round of the 2020 NFL draft. How has the offense changed without those key playmakers this year? Besides RB Kyren Williams, is there another playmaker Clemson fans should keep an eye on?

Driskell: Notre Dame has almost no vertical pass attack. Despite playing an incredibly soft schedule with mostly bad defenses, the Irish vertical pass game has been incredibly limited. Notre Dame has completed just eight passes that traveled at least 20 yards past the line of scrimmage, which puts them on pace for about 17 in a 13-game schedule. Last season, with Claypool, Kmet and Braden Lenzy (who is injured), Notre Dame completed 33 deep passes.

Notre Dame’s best weapons are the tight ends, freshman Michael Mayer and junior Tommy Tremble. Mayer has come on strong lately while Tremble has not been targeted nearly as much. That needs to change against the Tigers.

Freshman running back Chris Tyree is another player that Notre Dame needs to get the ball to against Clemson. Tyree won the Fastest Man competition at the Nike Football The Opening Finals prior to his junior and senior seasons, and he has shown that kind of speed already at Notre Dame.

Kantor: Ian Book seems to be getting more criticism this year than in years past. The critique generally goes something like this: “He can only take you so far…” “He’s a game-manager…” “He’s good, but you’re not going to win a championship with him.” Aside from his stellar performance against Pittsburgh, he hasn’t topped 263 passing yards (vs. Duke) or two passing TD (vs. FSU) in a game this season. How much, if any, credibility does this criticism hold? Does Notre Dame need him to be a dynamic game-changer to beat Clemson?

Driskell: Well, I’ve been making criticisms of Book like this since the end of the 2018 season. Here’s the reality, he is just 3-3 against opponents that finished ranked in the Top 25 during his career, and those three victories were against Northwestern, Syracuse and Navy. That’s not exactly the kind of wins that have you going down as an all-time great at a place like Notre Dame.

His losses were a 27-point loss to Clemson, a 31-point loss to Michigan, and a 6-point loss to Georgia. Now, the interesting part of this is none of those losses were at home, and Book has never lost a game as a starter at home. It certainly helps that the only ranked opponent he has faced at home is Navy (2019).

Book just hasn’t shown the willingness to play with the aggressiveness and confidence needed to beat the better teams on the schedule. Kelly loves to point to Book’s record as a starter, and he points to his stats. Yes, his 2019 stats of 34 touchdowns against just six picks is certainly impressive without context, but when you dig deeper you realize 26 of those 34 touchdowns came against non-Power 5 opponents or Power 5 opponents with a losing record.

Against Power 5 opponents that were at least .500 or better, Book had just eight touchdowns and four interceptions in seven games. If he plays great against Clemson on Saturday, it will mark the first time in his career as a starter that Book played big in a big game.

Kantor: Notre Dame’s defense has been superb this season. They rank 10th in yards per play allowed (4.49) and 6th in yards per game (267.2). What makes this defense so daunting?

Driskell: It’s a really impressive top-to-bottom defense. They have a couple of stars (Jeremiah Owusu-Koramoah, Kyle Hamilton), but it’s more about 11 guys playing extremely well together. It is a pretty athletic defense and it can throw waves of defensive linemen at opponents. None are dominant players (unless Daelin Hayes repeats his GT performance), but they are all good football players.

A big key to their success has been a dramatic improvement with its rush defense. Notre Dame had its worst stretch of run defense in history from 2014-16, and while it improved following that season, it was never great. After getting ripped apart by Michigan last year on the ground (303 yards), defensive coordinator Clark Lea got this unit going.

Since that game, in the 11 games against non-option teams, Notre Dame has allowed just 94.9 rushing yards per game and 3.0 yards per attempt. That includes holding AJ Dillon (BC) to just 56 yards and Javian Hawkins (Louisville) to just 51 yards.

Kantor: Finally, what do you feel the biggest X-factor of the game will be and in whose favor do you see it going?

Driskell: I think there is an X-factor on both sides of the ball. On offense (Notre Dame’s), can the Irish pass offense make enough plays against a talented-but-vulnerable Clemson secondary? Based on what I’ve seen on film, that favors Clemson coming into the game, but Notre Dame needs to flip that on Saturday.

On defense (Notre Dame’s), it’s Notre Dame’s ability to control the line of scrimmage, especially against the run. Notre Dame has to make Clemson one-dimensional, and if they are able to do that, they will then need to put pressure on D.J. Uiagalelei. It won’t be easy, but Clemson hasn’t been great running the ball this year, and they haven’t faced a front seven like Notre Dame’s.