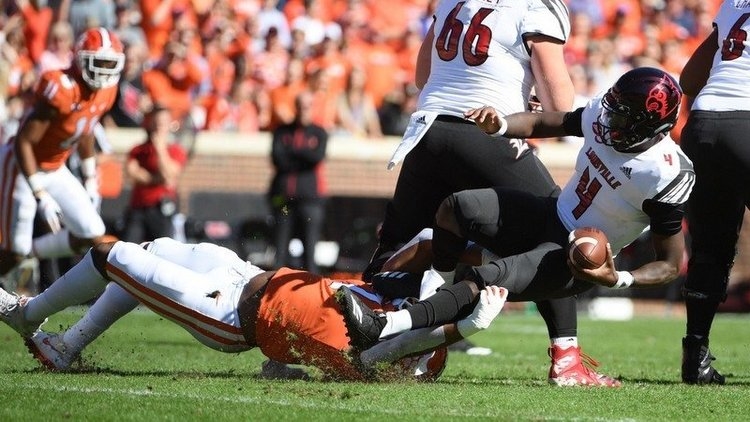 Clemson travels to Louisville this weekend.

Louisville’s Scott Satterfield is another head coach who can’t understand why the rest of the country doesn’t see Clemson as elite.

Louisville is coming off a 62-59 win at Wake Forest, the second-straight conference win for the Cardinals. Satterfield reviewed the Wake Forest win and previewed Saturday's game against the defending national champions, and he said he doesn’t buy into the national narrative that Clemson isn’t as good as past years.

“I was just watching that film and it was 42-0 in the third quarter, I was like ‘wow, man, they turned it on’. I think when they had that off-week they got back on track,” Satterfield said. “Everyone is talking about what is this Clemson team, but they have won 21-straight games, I think 14 out of their last 15 they have won by more than 14 points. It’s unbelievable that people want to try to write a story about this isn’t the Clemson team we are used to. These guys are good, they are well-coached, they expect to win, and they have a lot of talent.

“Again, 18-22-year-old guys they went into Chapel Hill maybe a little flat maybe give some credit to North Carolina, maybe they had a great defensive plan gave them some confusion and next thing you know you're sitting there in the second half of a tight ball game. That’s how you end up beating a team, like Clemson though. You hang close and around and next thing you know it’s the fourth quarter you're trying to go for a win. They go for two and don’t get it, but they were really close and it just shows you that you have to show up each and every week and it doesn’t matter who you’re playing, you could get beat by them. Our guys see that and hopefully, if we go out and execute, we have the opportunity to hang in the game and win.”

Satterfield was the head coach at Appalachian State when the Mountaineers played in Clemson in 2015, and he said the Tigers haven’t changed much since then.

“They’re not really a whole lot different. Obviously, the players are different. Over the last four years, they’ve pretty much been the same kind of team,” he said. “They’ve won 21-straight games, and that’s hard to do in college football with the parity that we do have. They played Carolina and it was a tight game there a few weeks ago. They’ve had a few slipups, but not many. They’ve won most of them, even if they didn’t play well, just because of the talent they have. They’ve done one of the best jobs recruiting out there in the country the last two or three years.

“They have some outstanding talent. They’re a little younger out front maybe this year defensively compared to last year without all those d-linemen who went to the league (NFL). But then you look offensively with the studs - the wide receiver, the quarterback. They just have a lot of talent all over the place. Most teams you play will have a few here and there, but they seem like in every position they have some of the better players, which makes it difficult.”

“No, we don’t talk about anything from last year. Since day one, we’ve just moved forward,” he said. “We are who we are right now. We’re just going to do the best we can today and tomorrow and so on and so forth. We just get out there and have a great game plan that we try to go execute and see what happens. It has nothing to do with last year. It’s two totally different teams. They’re different, we’re different, so we don’t even mention it.”

“They keep a lot of pressure on you because obviously the quarterback can run and when you do that you have to have someone keep an eye on him and their running backs maybe have a little bit more of lanes to run when you do that but they also have those stud wide receivers, too. So when you put all that together it makes it a difficult offense to defend, and then their number one running back, he is a complete running back. He has the speed if he breaks the line of scrimmage, he can take it all the way to the endzone, so he is a sprint champion coming out of high school and he has proven that he is one of the better backs in the country. That’s a difficult offense to stop.”