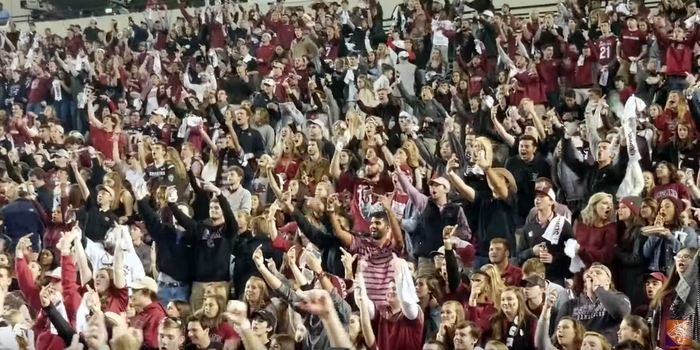 South Carolina students give the universal symbol for number one

COLUMBIA - Bottles of water, towels, fruit and all manner of debris rained down from South Carolina’s student section Saturday night, each toss followed by double birds. The game was still 40 minutes from kickoff and the students were already directing their anger at anything orange.

It got so bad at one point that head coach Dabo Swinney complained to the officials after water bottles landed on the Clemson sideline. One landed on the field, was kicked by a South Carolina player and hit wide receiver Deon Cain, prompting an outburst from Swinney that drew a 15-yard unsportsmanlike conduct penalty.

How did Clemson’s football team respond to the rancor? With the class that wide receiver Hunter Renfrow expects.

“I think just the stuff being thrown, that's just how they've been,” Renfrow said of South Carolina. “The things they've been saying on the field. I think we showed our class tonight as the game went along and I'm proud of the guys for showing it.”

Running back Tavien Feaster said the actions of the fans and players didn’t surprise him in the least.

“I wasn't surprised. It is what it is. It's just two different coaches,” Feaster said.

Defensive tackle Christian Wilkins said it fell to the team leaders to keep the Tigers above the proverbial fray, and that head coach Dabo Swinney’s message to the team was for them to keep their poise.

“Coach Swinney said it and the leaders took over from there just doing a good job of making sure everyone was into the game,” he said. “We knew it would get chippy. We knew the crowd would get into it so we made sure the leaders on the team kept everyone focused and locked into the game and not get distracted.”

Co-offensive coordinator Jeff Scott said the coaches knew things could take a turn for the worst, especially on rivalry weekend.

“There was definitely that talk. You can watch some of the earlier games today and see plenty of pushing and shoving,” Scott said. “Coach Swinney, the staff and our culture have done a good job and we have a team full of guys who have great class. That was messages - you guys have class, be who you are and don't let the environment, where you play or who you play change that.”

Defensive back Ryan Carter said the Tigers wanted to keep their composure.

“Coach Swinney was saying don’t let the emotion and magnitude rile you up,” Carter said. “That’s what he was trying to tell us, not to get into all of that. There is going to be some here and there but don’t make it to the point you are going to get thrown out or you’re going to be out for the next week where it’s going to cost us that big. He’s really preached to us about having our composure, and I thought the guys handled that really well.”

Defensive back Trayvon Mullen said the Tigers’ proved the Clemson program is run the right way.

“The way our program is run, we don’t get into things like that,” Mullen said. “We don’t let that stuff bother us. We come prepared and block out the outside noise.”