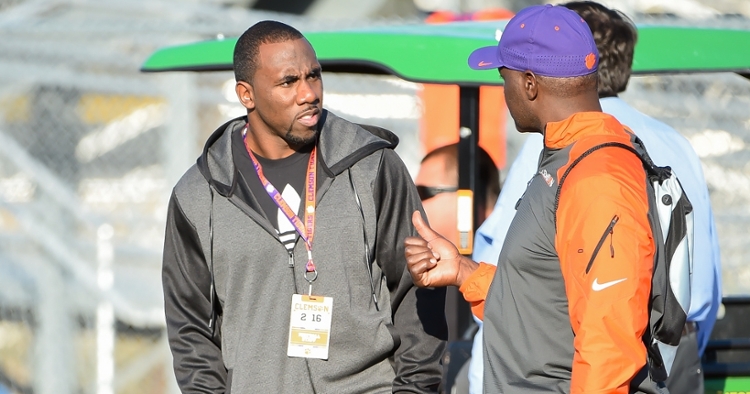 Spiller says he is humbled by the Hall of Fame honor.

CJ Spiller is known for his quiet demeanor but he’s rarely ever speechless. However, when he learned that he was to be inducted into the College Football Hall of Fame, words escaped him.

The National Football Foundation announced Monday that Spiller has been selected for induction into the College Football Hall of Fame as a member of the Class of 2021. Spiller earned the distinction in only his second year of eligibility.

Spiller is one of 11 players and two coaches in the 2021 College Football Hall of Fame Class selected from the national ballot. The class will be officially inducted during the 63rd NFF Annual Awards Dinner on Dec. 7 alongside the 2020 Hall of Fame Class, whose ceremony was postponed due to COVID-19.

Spiller went from bummed to speechless.

“Well, I mean last year was my first year on the list, well, on the ballot. With my first year of eligibility on the ballot being last year,” Spiller told TigerNet Monday evening. “And so, when it didn't happen last year, you're kind of bummed because you're hoping that you get in on your first try, but then you kind of understand there's a lot great players that play this game, and a lot of guys that deserve to be into it. So you just kind of just, wait your turn and hopefully that a day like this happens. So really honestly, I haven't really paid any more attention to it until I had seen it on social media that they were going to announce the class for this year on today.

“So I was just going to watch it anyway, just to see who was going into something that I always had done in the past anyway. So I was going to watch and see who was going to be getting inducted. And when I got the call and I was told that I was one of the members, I was really speechless, honestly. I still am speechless. It hasn't really sunk in. I'm really trying to grasp it all together and see what type of emotions I have, but I have so many emotions going through right now that it's really hard to put it into words.”

Spiller got the word from head coach Dabo Swinney, and then he turned around and called his uncle in Atlanta with the news.

“He's been a mentor and he's a pastor down there, and he's been a mentor for me since 2006,” Spiller said. “And he was the first one that I called after I got the call from Coach Swinney letting me know that I'll be getting inducted. He was the first one. Obviously, my wife was right there next to me, so she heard the news, but my uncle was who I wanted to tell. I kind of held it off just because they wanted it to be confidential until they made the announcement today. So I really didn't tell a lot of people. I really didn't tell anyone, really. I just told my mom now today, ‘Hey, be watching SportsCenter. Clemson got some big breaking news that's going to happen today. So you might want to see what's going on’ just because I just didn't want to jeopardize the rest of the class that's obviously getting inducted.

“So I just kept it on the low until today, but I knew my uncle wasn't going to tell anyone. Like I said, he's been a mentor for me now for 14 years and everything that he done poured into my life and that helped me be the person that I am. I knew it was only right that I could reach out to him and thank him.”

Spiller becomes Clemson's eighth inductee in the College Football Hall of Fame. John Heisman, who coached Clemson from 1900-03, was Clemson's first inductee as part of the Class of 1954. Clemson coach and administrator Jess Neely was inducted in 1971. Frank Howard, Clemson's all-time winningest coach, followed with induction in 1989. Danny Ford, who led Clemson to the 1981 national championship at the age of 33, was Clemson's most recent inductee, entering the Hall in 2017.

Spiller's historic Clemson career spanned 2006-09, culminating with a senior season in which he finished sixth in the Heisman Trophy voting after winning ACC Player of the Year and being selected as a unanimous first-team All-American. That season, Spiller scored 21 touchdowns and became the first player in ACC history to gain 1,000 yards rushing and 500 yards receiving in the same season.

Spiller said earning induction into the Hall is humbling.

“It's an honor...There's a lot of great players that are in the Hall,” Spiller said. “Football's been played for over 150 years, and there've been a lot of great guys that done played this game of football, and now for my name to be among some of the greatest to ever do it, I'm just truly honored and just humbled and just blown away that a small kid from Lake Butler, Florida, would now forever be considered one of the best to ever play this game that we all enjoy playing.”

“Like I tell people all the time, I'm just standing on the shoulders of other great men that came before me at Clemson. And honestly, when you come to a university ... I wrote this stuff. I wrote down my dreams and my goals when I was six and seven years old. It was something that I always dreamed about even as a little kid. So, coming to Clemson was just part of the journey that had to take place, but at the same time, I also understand that it was a lot of great men that came before me that played at this university. There's going to be a lot of great men that came after me. And really, I was just trying to just come here and just do my part.”

Spiller said he always wanted to present himself in a first-class manner.

“I was raised to respect people and to always make sure that my family name is represented in the right way. Not saying that I was perfect, because I had my ups and downs, but I always wanted to try to represent myself in a first-class manner,” he said. “And I think when you do that, when you do those types of things, then things like today give you the opportunity to celebrate with the people that was with you along the journey, that helped you get to this.

“I'm just truly just speechless and just blown away and really just thankful for Coach Swinney for not only just believing in me, but just believing in himself. That was really my first glimpse of, ‘Hey, this guy truly believes in himself.’ Because a lot of people thought he was crazy when he came and recruited me just because of the high status that I was and Clemson wasn't getting those guys, but he truly believed in himself that, ‘Hey, if we can just get a guy on campus, we can just see where it falls from there.’ So, I think our relationship speaks for itself. And like I said, I'm just grateful that he stuck with it, because a lot of guys would have been intimidated about recruiting a guy like myself if they had never done it before in their school.”