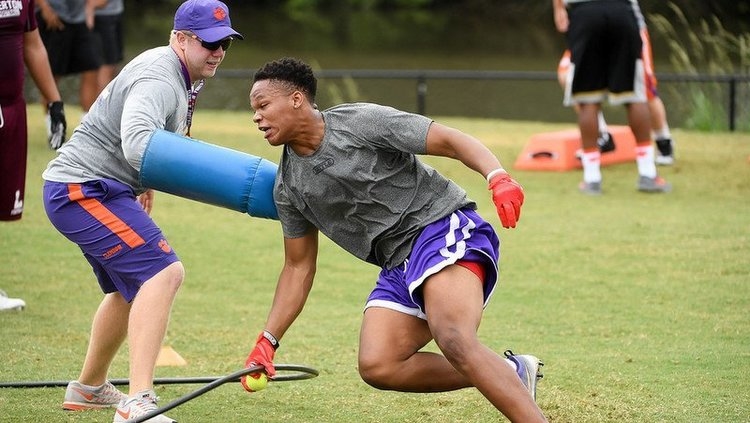 Clemson defensive coordinator Brent Venables puts players in the NFL each season, and one of the top players on the West Coast is taking notice. He also loves the fact that Clemson is a football town.

Sav’ell Smalls is a 5-star 2020 defensive end out of Seattle (WA) Garfield, and he released a top 12 Sunday that included Clemson. The others on the list are Alabama, Florida, Miami, Ohio State, Texas A&M, Oklahoma, Oregon, Texas, Washington, Florida State and Washington State.

"Yeah, I love Clemson," Smalls said. "Obviously, they’re one of my favorite schools but I love the way they take care of their players and the family aspect of the program and how everybody handles themselves. When I went down there, there was just a family vibe around the program. Everybody was just cool with each other and there was a whole bunch of love around. You could just feel it. Everybody had it - the GAs, the assistants running the camp, the coaches, the players. Everybody had that love for each other. It was just a really good environment to be in.”

Smalls said he loves the fact that Clemson is a football town.

“Just how oriented the place is on football. It's a football town,” he said. “Everybody lives and breathes football so there's so much support around the team. It was just great to have all of that.”

He has also taken notice of Venables' track record.

“It definitely is. He is playing and developing dudes like no other. Him and Coach (Todd) Bates and Coach Ski (Lemanski Hall), they all put in work to make sure those defensive guys get to where they need to be,” Smalls said. “It's even more attractive when you know you're going to make plays yourself with your talent, and your coaches are going to put you in a position to where even people without your talent can make the plays because the scheme is so good. He knows what he's doing, and he's probably the best defensive coordinator in college football, so that's just a plus.”

Smalls hopes to make it back to Clemson in a little over a month.

“I'm definitely going to get back this summer and hopefully for the spring game,” he said. “I just want to spend more time because when I was there, I wasn't there for long because I had to go on another visit, so I think I was only there for like a day. I want to spend more time with the team, talk with the coaches more, talk about scheme and football, talk about life and see where the opportunities are at Clemson. I just want to interact with people there and interact with the fans and see what life really is like.”

He then said he doesn’t mind playing away from home.

“It doesn't because I'm going to put myself in the best position for me to get to the next level and to be developed as a player and a person,” Smalls said. “If that's in Washington or Florida or South Carolina, no matter where it is, that's where I'm going to be.”

“Good business school. Able to compete and win national championships,” Smalls said. “Good culture around the team where people look out for each other. A city I can live in and enjoy my time for three years.”