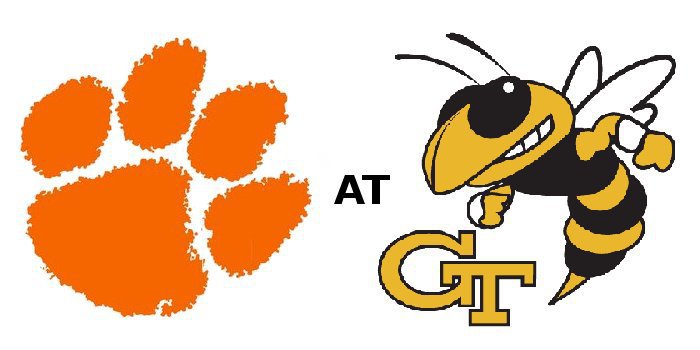 Something has to give when Clemson meets Georgia Tech tonight in Atlanta.

The Tigers and the Jackets face off in a crucial ACC matchup at Bobby Dodd Stadium, and there are several streaks or statistical oddities on the line, for both teams.

*The home team has won each of the last seven home games in the series.

*Since Tech joined the ACC for the 1983 football season, the teams are tied with 17 wins apiece.

*Clemson hasn’t won against Tech in Atlanta since defeating the Jackets 39-3 in September of 2003. Co-offensive coordinator Tony Elliott caught a touchdown pass in that game.

the only regular season game Clemson has lost when Deshaun Watson started at quarterback. Watson only played 18 snaps in the game – he suffered a knee injury in the first period and did not return.

*The Yellow Jackets are a sterling 7-2 at home versus ranked teams in eight seasons under head coach Paul Johnson.

The Tigers will have to make the most of their opportunities when they have the football because Tech will slow the game down and limit possessions. Georgia Tech is seventh nationally in scoring defense and 27th in overall defense, but the Jackets have yet to play an offense with any kind of pulse. Clemson has a pulse and more. The Jackets are led by senior linebacker P.J. Davis, who has 20 tackles in three games. What the Jackets haven’t done well, however, is get pressure on the quarterback. They have just four sacks on the season and no player has more than one. The Jackets have also been average in run defense, so the real battle here is between Clemson’s offensive line and the Tech defensive line. Neither unit has played well this season, but Clemson’s offensive line fared better against outmatched SC State last weekend after line coach Robbie Caldwell held a “come to Jesus” meeting with his group after the Troy game. If the Jackets can’t get pressure on Watson and the run game isn’t completely stymied, it will be hard to keep Clemson from scoring because the Tigers have too many weapons on the outside. Running back Wayne Gallman had 30 carries at Auburn in week one, and we could see a similar effort this week. The key for Clemson’s offense against Tech – and has been since 2009 – will be limiting turnovers. If Clemson can keep the turnovers at a minimum they shouldn’t have a ton of trouble moving the ball, getting the Jackets down early and forcing Johnson’s hand. ADVANTAGE: CLEMSON

WHEN GEORGIA TECH HAS THE BALL

The Jackets are brimming with confidence and Johnson feels like he has the kind of offense he had back in 2014. So far, however, the numbers don’t agree. The Jackets are averaging 257 yards per game on the ground, good for 18th nationally. They’ve made their living through the air, averaging almost 190 yards per game through the air. That’s great against Mercer and Vanderbilt, but will Justin Thomas have the kind of time and success against Clemson as he did against those schools? Under Brent Venables’ direction the past few seasons, the Jackets have been abysmal running the ball because they can’t run between the tackles against Clemson’s large defensive tackles. Over the last two seasons, Tech backs have carried the ball 38 times inside and have averaged just 3.1 yards per rush. That’s strong, and when the inside is shut down it’s easier to predict the outside runs. Tech will have success on the ground at times, and they’ll burn one of Clemson’s young defenders through the air a time or three. But Thomas will get pushed and shoved and harried by Clemson’s defensive front enough to force punts. The point then becomes..can Tech outscore Clemson? ADVANTAGE: EVEN

Clemson’s special teams haven’t been perfect, but they’ve been better this season. Ray-Ray McCloud is a true home run threat at punt return, averaging 25.33 yards per return to rank second nationally. Clemson is fourth nationally in kickoff coverage. Punting has been an issue – Andy Teasdall ranks 94th nationally – and Greg Huegel has missed an extra point. Tech’s J.J. Green is a threat at kick return, while kicker Harrison Butker is a weapon on field goals and kickoff. ADVANTAGE: EVEN

This game has all of the earmarks of another Clemson letdown in Bobby Dodd – they are favored to win, the Jackets are looking for revenge and acceptance and it’s on a Thursday night, where weird things happen. The crowd will be loud and unruly (for a Tech crowd) and the stadium will be buzzing. It sets up for a colossal Clemson failure. Turnovers will be key - Clemson has lost five straight games at Georgia Tech and Clemson has turned the ball over at least twice in all five of those games. That’s nine interceptions and six lost fumbles for a total of 15 turnovers.

However, this Clemson team has Watson and a different mindset than the teams in the past. And while past Clemson teams have been more talented and still lost, the talent gap at certain positions on the field is really wide this time around. I’m not sure Tech has one player that can cover Mike Williams or Deon Cain or Ray-Ray McCloud or Artavis Scott, much less when they are all on the field at the same time. But Clemson will try to out-physical the Jackets and run with Gallman while setting up opportunities for Watson and company down the field. Expect tight end Jordan Leggett to make an appearance as well – he’s been silent so far this season. This one will be tight and too close for comfort until late, when the Tigers go up enough to take the Tech offense out of its gameplan and Venables turns Ben Boulware and company loose on Thomas.