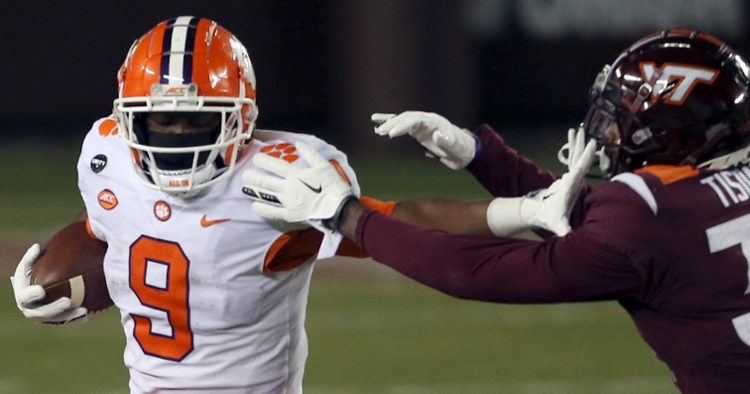 BLACKSBURG, VA – Tony Elliott knew his offensive gameplan against Virginia Tech was going to be different than normal, but it wasn’t until the game started that he realized how different it would be and adjustments were made as the game progressed.

Quick note on the Sugar Huddle… the Sugar Huddle is a variation of the regular huddle formation that Auburn has utilized throughout the course of Gus Malzahn's tenure at Auburn and is often used when attempting to get into an offensive formation he doesn’t want to expose to the defense.

Clemson also ran the ball 30 times for 238 yards, only the second time this season the Tigers have been above the 200-yard mark in rushing (258 against Miami). Clemson also managed 19 first downs, which means the Tigers achieved a first down on 37 percent of their plays.

“So really, the challenge was to make sure we were more efficient because we knew we weren't going to get as many opportunities as we normally do when we get 12 or 14 drives in a game. So that impacted it even more, and then because of the elements they played a little tighter coverage and were rolling some coverages on the back end to try and discourage us from running the ball. But once we were able to establish the line of scrimmage and we saw that we were running the ball effectively, we wanted to lead with the run and control the line of scrimmage and be efficient and try and hit some big plays when we could.”

Elliott made the in-game adjustments once he saw the Tigers would be able to run the ball.

“You have to keep your ego out of it and just try and establish the run and be efficient. Try and figure out what they are doing,” he said. “It's hard to figure out what they are doing because they don't show a lot of tendencies. They are going to give some zero pressures (in 'zero' pressure, the defenders play from an inside shade [inside eye of the receiver] without any safety help in the middle of the field) and you never know when it's ccoming. Once we saw that we were able to get some push up front and the backs could find the running lanes, we knew that we could lead with the run and then somewhere down the road it would open up some of the explosives in the passing game.”

Many wondered why freshman wide receiver EJ Williams didn’t see the field much after the first few series, and Elliott said it was all based on personnel groupings.

“Part of it was to try and get Brannon rolling. We played a lot of 12 personnel stuff (two tight ends, one running back) and took our third wide receiver off the field,” Elliott said. “It was more of a function of rolling those guys and keeping them in the game and then substitution rotations that Grish (wide receivers coach Tyler Grisham) had.”

The ability to run the football and put pressure on the defense starts with having a quarterback who is a threat to run the ball, and quarterback Trevor Lawrence carried it seven times for 42 yards and two scores.

“It makes people honest. If they load the box they still don't have enough hats,” Elliott said. “It's critical on offense with a lot of the RPO stuff and the ability to read that first-level defender on the line of scrimmage puts pressure on the defense. On the first touchdown we had, Trevor did a good job of reading the backside end and it puts pressure on them and makes it hard for them to be right. When we have the ability to run at quarterback it opens up everything else.”