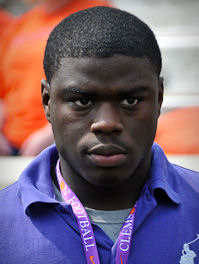 Defensive End
B I O
As a senior, he had 99 tackles, 23 for a loss, nine sacks and five forced fumbles. As a junior, he had 100 tackles, 23 tackles for loss, 13 sacks, and two touchdowns. He is a also basketball prospect who won a state championship as a post player with current Clemson Tiger DeAndre Hopkins. Attended Clemson's junior day in March. Committed on 3/6/2011. Class of 2012 ESPNU 150 Watch List Recruit. #50 rated player and 4 star recruit based on the 2012 AthleteVault NC/SC Rankings.

He is a relentless worker and has a great motor on him. He is a great athlete that had played basketball in high school. He was rated as the #1 DE in prep school and has enrolled to complete for playing time in 2013.

Last night, MfOjr. had a scrimmage, 9-10 year olds. After