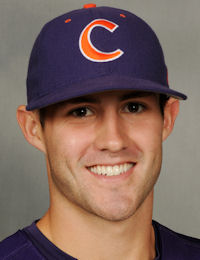 2009: Red-shirted...suffered a back injury early in the season and had surgery in March.

BEFORE CLEMSON: Team MVP as a senior at A.C. Reynolds High School...set the school record for career hits...four-time all-conference honoree...drafted in the 40th round (#1210 overall pick) by the Philadelphia Phillies...#170 prospect in the nation by Baseball America and #314 prospect by Perfect Game...#13 prospect in North Carolina by Perfect Game...East Coast Professional Showcase selection in 2006...represented North Carolina in the 2006 National Home Run Derby in Delray Beach, FL, where he advanced to the semifinals...set single-season school records for doubles (14) and hits (44) along with totaling nine homers as a junior...lettered four times in baseball at A.C. Reynolds High, where he was coached by Bryan Craig.