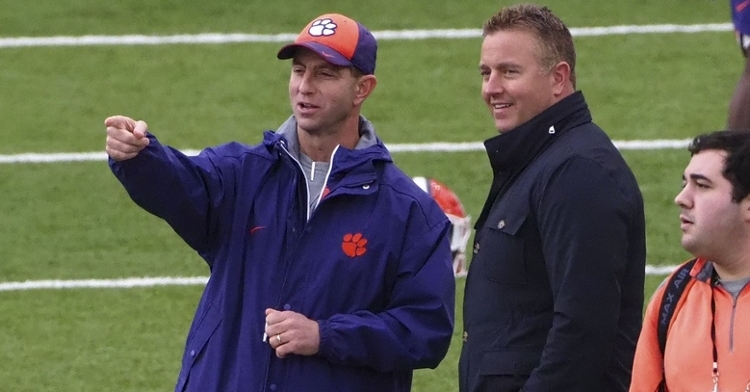 Clemson is currently licking their wounds and getting healthy after a tough double-overtime loss to Notre Dame on Saturday night.

The Tigers played the contest without several starters including Heisman frontrunner Trevor Lawrence.

ESPN commentator Kirk Herbstreit spoke with reporters during a media teleconference on Wednesday night and talked about Clemson's path forward after the loss.

"I think if you look at their history, they’ve been upset along the way towards championship years, they’ve had some scares against teams that you probably, on paper, wouldn’t expect them to be in close games," he said. "But you know, it’s hard to go 12 weeks, or in this case, whatever it is this year – 10 or 11 weeks – and bring your A-game every week."

Herbstreit won't be shocked if the Tigers get on a roll for the rest of the season.

"In this case, they played a team that was, you know that night, they were better," he said. "Notre Dame was better than Clemson. I think the fact that you know, we knew going in, it wasn’t an elimination game fact that Clemson had a lot of injuries and the fact that Clemson has a chance to get healthy and they’re sitting at four in the AP and four and the coaches that committee hasn’t come out with their rankings. You figure that this is going to not so much be a wake-up call. But I think it’s going to be a reminder of you can lose games and everybody can lose a game, and now we’ve seen them use a game like this in the past to get them right and to get them ready to roll the rest of the year so that it wouldn’t shock me at all."

Clemson has some winnable games down the stretch to get back to the ACC Championship.

"If you look at what they have left with Florida State and Pitt and Virginia Tech and then you would think ACC championship, I think their best football is ahead of them and I’m excited to see," he said. "You can only go by history and a track record. I’m excited to see Trevor come back and eventually James Skalski and just kind of see the energy that this team plays with the rest of the year."

Clemson's next game is Florida State, coming up on Nov. 21.