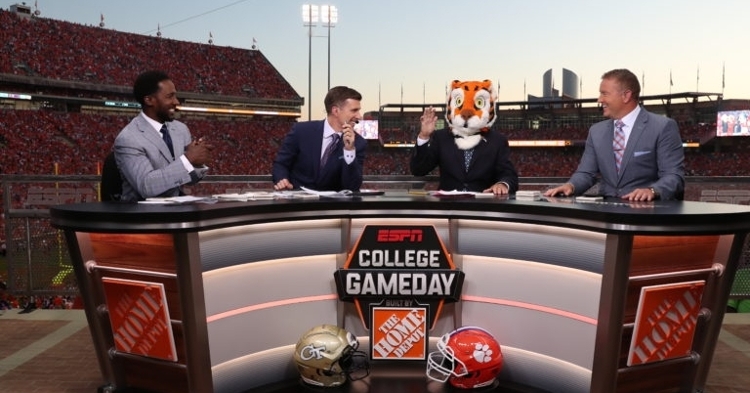 College GameDay Built by Home Depot is set for its fifth road show of the season, originating from Memorial Stadium at Clemson University ahead of the top-eight matchup between No. 1 Clemson and No. 7 Miami (7:30 p.m. ET, ABC). The three-hour traveling pregame show (9 a.m. – noon) will air on ESPN and ESPNU as it does each Saturday throughout the season.

The 11-time Emmy Award-winning show is hosted by Rece Davis, who is joined on-site by Kirk Herbstreit, Desmond Howard, David Pollack and Chris ‘The Bear’ Fallica, with Lee Corso from his home in Orlando. Additional contributors throughout the season include Jen Lada, Pat McAfee, Tom Rinaldi, Maria Taylor and Gene Wojciechowski.

The show precedes a full slate of action across ESPN networks, beginning at noon. Herbstreit will join Chris Fowler and Allison Williams for the ABC’s Saturday Night Football game featuring the Hurricanes and Tigers.

Saban and Kiffin – Don’t call it a reunion, but when Nick Saban and Lane Kiffin (and their respective teams) meet Saturday, it will be the latest chapter in one of the sport’s more compelling and entertaining “relationships.” How did we get here? Will there be an “ass chewing”? And what about that rat poison? Lane Kiffin sits down and talks about his time with Saban, its challenges, its benefits, and why he texted his old boss to say he was “grateful.” Reporter: Tom Rinaldi

Lincoln on the Losses – The last time Oklahoma lost two regular season games in a row was in 1999, head coach Lincoln Riley was a sophomore in high school at the time. Now the Sooner boss sits down to discuss the shock of the last two weeks, his message to himself and his team, the importance of the Texas game, and if he believes his team can still make the playoff. Reporter: Gene Wojciechowski

The Understated Superstar – Perhaps no player in the nation is more elusive on or off the field than Clemson running back Travis Etienne. Already the career touchdown leader in the ACC, the senior is poised to re-write the record books, but don’t expect to learn any of that from him. Reporter: Jen Lada

He is 5-7 all-time when picking against the Canes

Corso has picked Clemson 11 times and is 9-2 with those headgear picks, including eight straight wins

Stats from ‘The Bear’

This is the second straight top-seven matchup GameDay has attended