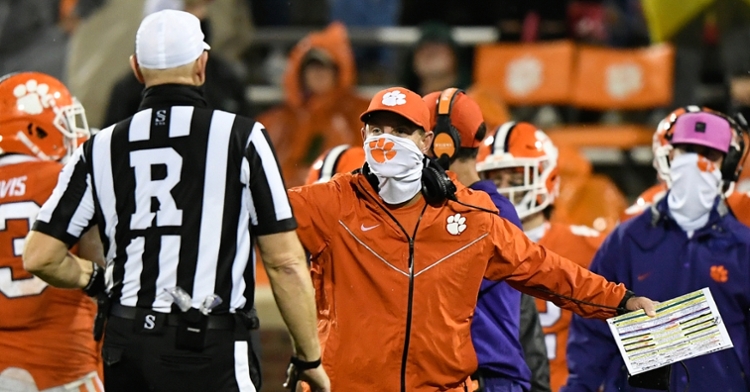 Clemson-FSU rivalry is getting more interesting of late

However, the elephant in the room was still the last second postponement of the Clemson-FSU game and the back and forth with Swinney and Florida State head coach Mike Norvell.

"Football coaches are not doctors," Mike Norvell said on Monday, possibly take a jab at Swinney. "Some of us might think that we are, but there’s a reason why those advisors are able to make the decisions from the information that is provided."

Swinney had the following response concerning the above comment by Norvell when asked by a reporter.

"We are not doctors. I’m not trying to be a doctor," he said. "I just listen to the doctors."

Swinney then talked of Florida State's lack of success throughout the last several seasons.

"I’m not really worried much about what they say down there in Tallahassee, that’s for sure," he said. "I’ve been in this league for 18 years. I’ve been the head coach here for 12 years. They’ve had three head coaches in four years, so the decisions that they make…I’m not going to worry about advice from Tallahassee. I trust the people here. I trust our doctors. 100 percent."