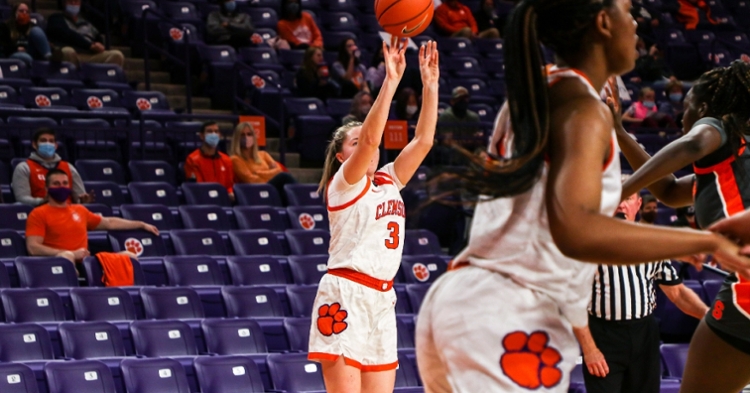 CLEMSON, S.C. — Hanging on for a noteworthy victory, Clemson topped No. 23 Syracuse in overtime on Sunday. After taking part in a double-overtime affair earlier in the week, the Tigers came out on top in an intense overtime duel versus the Orange, winning 86-77 at Littlejohn Coliseum.

In the action-packed showdown, Clemson (9-5, 4-5) shot 40.5 percent from the field, and Syracuse (7-3, 4-3) finished with a field goal percentage of 40.3. The Tigers knocked down 10 3-pointers and 16 free throws. They also notched 12 steals, scored 22 points off Syracuse's 20 turnovers and amassed 30 points in the paint. Clemson won the rebounding battle 54-39, with its 24 offensive boards contributing to the 22 second-chance points tallied by the Tigers.

Kendall Spray showed out in the shooting department, sinking 7-of-12 3-pointers and leading the Tigers with 24 points. She also grabbed six rebounds. Amari Robinson scored a season-high 23 points to go along with her nine boards and four steals. Delicia Washington came up with a double-double by way of her 17 points and 11 rebounds. She blocked three shots, as well. Hannah Hank made a significant impact with 15 points and eight rebounds. For Syracuse, Kiara Lewis led the way with 25 points and eight boards.

Washington set the tone early with an emphatic block in the opening minute of play. A Robinson jumper broke the scoreless tie soon after that, and a Robinson 3-pointer increased Clemson's lead to 5-1. Spray, who made a trio of treys in the first quarter, showed off her impressive shooting range by letting a deep three fly from the edge of the midcourt logo and burying it. The Tigers boasted a commanding 11-1 lead at that point and entered the second quarter leading 29-10.

Robinson netted a three-ball to kick off the second-quarter scoring and, inside the seven-minute mark, added a couple of layups in short succession, with Washington assisting on the second one. Spray managed to drain a three while being hounded by two defenders and, a few Clemson possessions later, put the Tigers up 42-23 with another shot from beyond the arc. With three players scoring in double figures in the first half, Clemson sported a sizable 52-27 advantage at the intermission.

The Orange found a way to claw back into the thick of things out of halftime, outscoring the Tigers 23-9 in the third quarter. Robinson paced the Tigers with six points in the period. With the score standing at 61-50 as the fourth quarter got underway, Clemson was able to cling to its lead for most of the period. A 3-point play by Lewis with 1:07 remaining gave Syracuse its only lead of the afternoon at 68-67. Spray misfired on an ensuing 3-point attempt but connected on a second-chance three-ball made possible by an offensive rebound corralled by Robinson. A jump shot by Syracuse's Emily Engstler with 27 seconds left knotted the score at 70-70, and overtime commenced shortly thereafter.

Hank stole the ball on the opening possession of overtime, and an offensive rebound on Clemson's first possession led to Destiny Thomas swishing a 3-pointer from the corner. A 3-pointer by Spray increased the Tigers' lead to six with 1:54 on the game clock, and Engstler responded with a trey of her own. However, Clemson pulled away to close out the game, going on to win 86-77.

Following a short turnaround, Clemson will take on Pitt (3-4, 1-3) at Littlejohn on Tuesday, Jan. 26. The Tigers will be looking to avenge their 80-71 loss to the Panthers from earlier in the season. Tuesday's tilt will tip off at 7 p.m. and air on ACC Network Extra.

"I'm super, super proud of the way our group responded today. They played with a tremendous amount of heart, determination and belief. Even when Syracuse whittled the lead down, our players kept a confident look in their eyes. I knew we were going to gut it out."

On the keys to the game:

"We worked an awful lot on our ball screen coverage in preparation for this game, and it paid off. We just had a really heady group out there today. We've been a really good offensive rebounding team all year. We just haven't been cashing in, so that was a big step forward for us to be able to capitalize on offensive boards like we did with 22 second-chance points."

On the performance by her team:

"Part of our game plan today was to win one possession at a time. In terms of personnel, that was secondary to keeping fresh legs out there and trying to keep pace. We just had a tremendous amount of confidence in everybody, and they were confident in each other."

"Shooters get really excited when they see zones. Kendall came into this game very confident, knowing she'd get some looks and be ready to knock those down. When it was her time to make the most of those chances, she did."

Nothing like a nice cold shower after a big W. ?? pic.twitter.com/HDmO2yy7tL