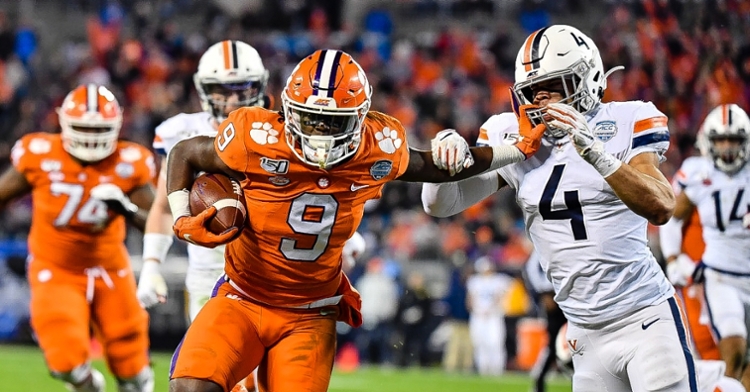 ACC games are back and are scheduled all the way through December for the No. 1-ranked Clemson Tigers.

This Saturday, Dabo Swinney’s group is a four-TD favorite for the second time in roughly 10 months against the Virginia Cavaliers.

After the bye week, Clemson has top-5 rated offensive and defensive groups and a top-25 special teams unit. Virginia, which ranked 15th nationally in returning production on defense from a 52nd-ranked group (SP+), brings a solid defense and a rebuilding offense into Death Valley:

The Cavaliers have only played one game so far with a 38-20 home win over Duke last week but here were the standouts:

Nelson (5-11 180) led the ‘Hoos defense Saturday with an 82 grade overall and 82.4 grade in coverage. He was targeted five times in coverage and didn’t allow a reception, picking off two passes. The Miami native earned ACC defensive rookie of the year honors in 2017

Extra point: Redshirt sophomore QB Brennan Armstrong makes his second career start on Saturday. Armstrong’s opener grade (74.4) sits in fifth-best among ACC QBs so far. (Easily in the ACC and nationally led by Clemson’s Trevor Lawrence, 95.3). He connected on 24-of-45 passes for 269 yards with two touchdowns to two interceptions against Duke. Armstrong was the victim of six drops from his receivers. He was only sacked once but went 8-of-18 for 73 yards with a TD and a pick when blitzed (4.1 yards per attempt) and 5-of-13 passing under pressure (5.5 YPA). To compare to next week’s ACC QB opponent, Miami’s D’Eriq King -- King has graded 89.7 overall and 87.1 in the passing game with a 62.5 completion rate against the blitz (9 YPA) and a 30.8 rate under pressure (5.6 YPA).

(Grades and advanced stats per PFF)

SP+ is still learning something about both teams but it likes Virginia to cover the big number by a lot, projecting a 17.7 margin of victory for the Tigers. SP+ picked Clemson by 21 in the ACC Championship Game versus Virginia before a 62-17 final.

The closest to that final big spread in December was the FEI metric, which had the Tigers by 34. The FEI view for this one is closer to the Vegas spread than SP+ with a 26-point projected margin.

ESPN’s Football Power Index is also more bullish on Clemson with a margin right around the number (26-point margin on a neutral field).

Virginia was favored by four in its opener and rallied with a flurry of forced turnovers to win by 18 over the Blue Devils. While Clemson didn’t come close to clearing a 35-point spread for its lone FBS game so far at Wake Forest in a 37-13 win on Sept. 12. Given how the Tigers are trying to get a young team experience, four touchdowns seems like a lot at this point but they should control things early.