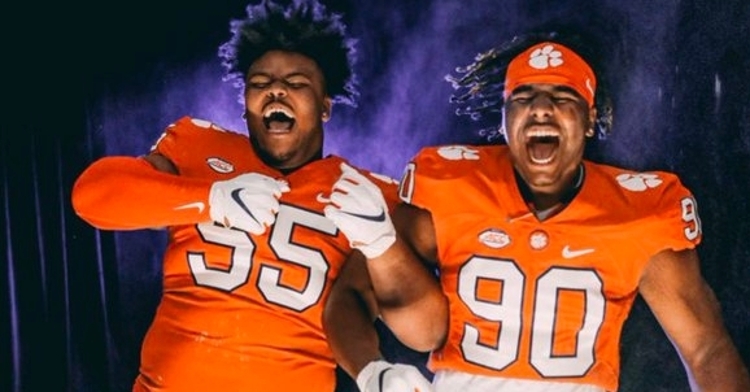 Page (left) had a good time with Korey Foreman (right).

As the crazy scene of four prospects committing to Clemson last weekend unfolded, all Payton Page could think about was that his time is coming.

The 5-star Greensboro (NC) Dudley defensive tackle and top prospect out of North Carolina for the 2021 recruiting cycle was on hand for the commitments of the nation’s top prospect in defensive end Korey Foreman as well as wide receiver Beaux Collins, defensive end Cade Denhoff and tight end Jake Briningstool.

Page just sat back and took it all in.

“Oh my gosh, it was crazy. It's not that far away for me, that's all I've got to say,” Page told TigerNet.

Page and Foreman met for the first time during last weekend’s visit to Clemson and they immediately hit it off.

“The visit was pretty good. Korey made it fun,” Page said. “Just hanging out with someone who gets all of the recruiting and stuff like that just made it fun. We just clicked instantly when we got there. Korey and I talked a lot. We built our relationship and we’d like to play together.”

Clemson is known as a school that doesn’t cast a very wide net in recruiting, so when the coaches told Page he was the only defensive tackle on their board, the message stuck.

“They said that they're the only d-tackle they're recruiting right now and that's going to be a big factor,” he said. “All of the other schools that are in my top-five, there are six or seven (defensive tackles) that they've offered. They talked about their plan for recruiting me. They are only going to take one defensive tackle right now, and that’s me.”

Page is currently 6-4 and weighs in at 315 pounds and head coach Dabo Swinney told him they don’t have any guys on the roster who are built like that.

“He said the same thing that I'm the only d-tackle they're recruiting. He said that I would make an immediate impact because there's nobody there that looks like me right now,” Page said of his conversation with Swinney.

What stands out about Clemson?

“The big thing is that they treat me like family,” Page said. “It feels like something different. But I also have to go to the other schools.”

Page recently released a top five of Clemson, North Carolina, Oregon, Tennessee and LSU, and while he wouldn’t say where Clemson stands right now, he is looking to decide soon.

“I can't really say that all of that. I'm going to make a decision before my senior season,” he said.