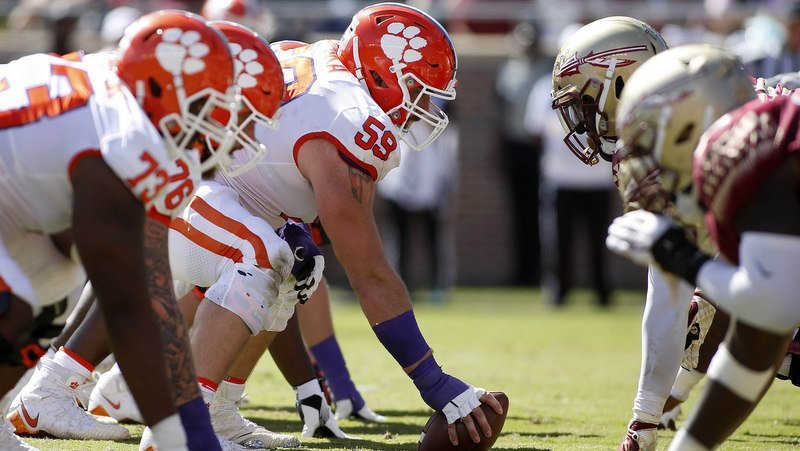 Clemson won the battle along the line of scrimmage (Photo by Glenn Bell, USAT)

The grounds surrounding Doak Campbell Stadium were uncharacteristically quiet Saturday afternoon. The early autumn sun was starting to dip below the horizon and the only people left were workers and support personnel – and one small group of dazed Seminole fans still sitting at a tailgate.

“I guess it’s time to turn off the gas,” the wife said to her husband, nodding her head towards a propane grill.

“I guess so,” the husband answered. “There’s already been too much scorched around here today.”

With a heavy sigh, he got up and started to pack.

Compare that to four short years ago – we walked through the parking lots late in the night after Clemson had squandered a golden opportunity to knock off the Noles, losing 23-17 in overtime. It was the third consecutive loss in the series for the Tigers and came a year after being embarrassed 51-14 in Death Valley by Jameis Winston. Following that game in 2014, the fans stayed singing and drinking in the parking lots for hours, deep into the night.

A lot has changed in four years, and I was given some insight into the difference in the two programs about forty minutes before the start of the game. A member of Clemson’s traveling party stood on the sidelines, looked at the faded paint on the façade inside the Doak, and mused to another that, “this place wouldn’t look like this if Dabo was here. It just wouldn’t.”

His confidant looked over and said, “Maybe not. But I’ve always thought Jimbo Fisher ran into trouble here because he didn’t stay humble. We have to stay humble in everything we do, just like Dabo says. If we stay humble, good things will continue to happen.”

Then, those humble Tigers went out and took all of the shots Florida St. would throw – including punches – and shrugged them off with a smile and humiliated the Seminoles on the same turf that saw so much heartbreak just four years ago.

One FSU insider told me before the game that the grass at Doak Campbell has been dying, a fungus spreading on the field, and as I walked over that same grass to postgame interviews, I thought about how easy it is for a fungus – something that feeds on organic matter – to get inside something beautiful and cause so much destruction. It was, to me, an apropos comparison.

As for the humble Tigers, there was big defensive tackle Christian Wilkins scoring a touchdown and looking for running backs to hug. There was tight end Garrett Williams, an unsung hero, scoring a touchdown inside the stadium where his father played. As Williams ran off the field, Swinney stopped him and gave him a hug, the kind of moment both will always remember, and that one moment made it easy to see why players love playing for Swinney.

There was Trevor Lawrence, the golden child, taking a shot to the chin after a run to the sideline. As Lawrence battled to get off the ground, the players on the sidelines started to run to his aid, and in that moment all the concern about whether the team would support Lawrence dissipated. As Dabo would say later, game knows game, and these guys know that Lawrence can help lead them to the promised land.

Some of the numbers over the past 3 ½ half games are staggering. Since halftime of the Syracuse game, Clemson has outscored the opposition 183-27. That’s all against conference competition, and it shows that this is a team that is beginning to hit its stride.

The Tigers are 8th in total offense and 3rd in total defense and face a beleaguered Louisville program this Saturday. The Cardinals have lost five straight, haven’t won a game since Sept. 15th, haven’t beaten a team from a Power Five conference, and sit at 0-5 in the ACC. They are 114th in total offense and 102nd in total defense. They are 125th in rushing defense, 124th in tackles for loss and 124th in sacks. That means the Tigers are likely to roll again.

As we continued the walk to the parking garage we passed by the Florida St. sod cemetery, a tradition that dates back to 1962. The sod cemetery represents some of Florida St.’s greatest road triumphs and there are four Clemson markers in the cemetery. Because the Noles play Clemson Saturday, there were orange, white, and purple flowers placed at each of the Clemson markers.

The flowers, probably fresh earlier in the day, were beginning to wilt, no doubt a sad reminder of the high hopes from earlier in the day. I let out a large breath after taking a picture and a Seminole fan said, “You can say that again.” I remarked that it had been a long day at the office, and he smiled a rueful smile and said, “Any day at a football game is better than any other day.”

That reminded me that for all football fans, especially those of us who love college football, hope springs eternal. There is always next week and next year. Florida St. will be back – the tradition is too great, the recruiting grounds too fertile, the fan support too good.

As the fans turned off the gas to their grills, Clemson is stepping on the gas, driving towards the College Football Playoff. Swinney calls the next portion of the season the championship drive, and right now the vehicle is hitting on all cylinders.