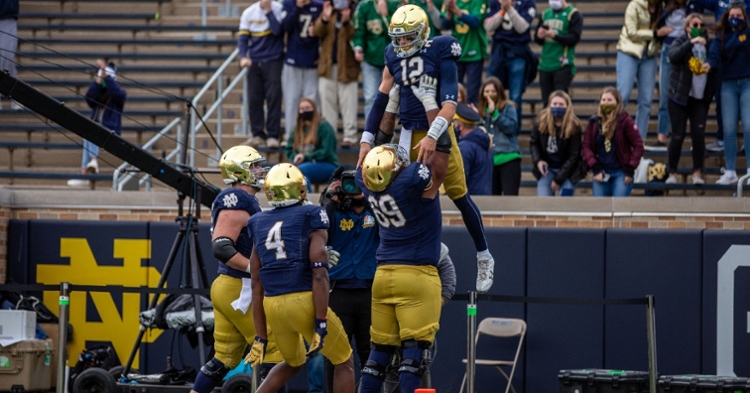 Clemson takes on the Irish at 7:30 Saturday on NBC. (Photo courtesy ACC)

It will be a battle of top-five teams in South Bend, Indiana Saturday evening.

No. 4 Notre Dame (6-0) hosts No. 1 Clemson (7-0) for the first time since the College Football Playoff semifinals in 2018, when Clemson won 30-3 in the Cotton Bowl. Various Clemson players were made available for interviews Tuesday, and the following are snippets from each interview with full stories to come later.

The game will be broadcast at 7:30 pm Saturday on NBC.

*Practicing on Sunday is unusual. Second time he has done it in his career – did it before when they played on a Friday at Syracuse. He says the guys have handled their business really well. He is confident they will prepare this week.

*The win over Boston College shows a lot of resolve and maturity. Shows the type of program they have.

*He says that DJ Uiagalelei is a calm, quiet kid with an absolute cannon. Doesn’t get rattled very easy.

*Bockhorst says the OL wants to play well. He understands that Notre Dame has a great reputation for OL and put guys in the NFL, and he knows some of them. He wants to put his best foot forward.

*Mike Tirico is on the call. Lot of national media will be on here this week for the top-five matchup.

*On if Notre Dame will stack the box to stop Travis Etienne, he said, “If I was a betting man, that is the way I would bet.” Said Boston College schemed to stop the inside zone and it was very effective and other teams will see that and use it. However, “Travis has found ways to make some unbelievable plays.”

*On the play where he was ejected, he said he was trying to bat down the pass. He said he wasn’t trying to target anyone, it was just instincts, playing football.

*On what he’s been through, he feels better and better each week. Coming back in the summer, he was winded and his breathing wasn’t very good. He felt like he was making progress and then got strep throat and it made him fall behind. Now he feels like he is stacking good days together and is on the right track.

Didn’t feel like he got his breathing back until week one or week two, but was still training and going through protocol so he was getting his legs back and breathing and practicing so it was a process. Right now he wants to make progress every week.

*He said he has already voted. Will use Tuesday as a rest and recovery day and watch film since they aren’t practicing. He encourages everyone to get out and vote if they are eligible. He said the coaches and players have been very vocal about that at Clemson.

*He is asked if it will be tough for Alabama people to vote for former Auburn coach Tommy Tuberville and he laughs and says, “That is interesting. I haven’t thought a lot about that. I don’t know.”

*On the second half adjustments versus Boston College, he said they didn’t make a lot of adjustments and simply made more plays. He said he made a bad play on a fade ball that covered 40 yards and two plays later the Eagles score. The team came out in the second half and started making stops and it helped when the offense got into a rhythm. He said the defense didn’t help out the offense in the first half.

*Said he has taken his preparation to the next level. He is not excited that LB James Skalski is hurt but he is ready to go and play.

*Despite the injuries, everyone has to step up and be ready to go this weekend. Losing so many people is a big blow but there isn't anything anyone can do about it. People just have to step up.

*On Notre Dame OL, Venables says they are a veteran group and this will be a big challenge this week.

*On his brother Tyler having the nickname T-Bone, Jake said that his dad Brent gave Tyler the nickname when he was born. He says Tyler has a "different edge" to him and is "full of rage." He said there are times when his dad has had to tell him to calm down.

*Nothing will change on Tuesday despite not having practice. Guys will still lift and go through recovery and be in the facility and watch film.

*Amari was asked if they call DJ Uiagalelei "Big Cinco" or if they have other nicknames for the talented freshman, and he said they have a lot of nicknames for him. He said Uiagalelei has swagger and is always in a mode to joke around.

*On becoming the go-to receiver, he says he accepted the challenge and knew going into this season he had to step up. He says all of the hard work he has put in is paying off and he is wanting to do everything he can to get wins.

*When he first met Uiagalelei, he says he knew about him because of his dad working out in Cali. He says DJ is laid back, cool, calm, and collected. When Etienne fumbled, DJ went over to the senior running back and said he would help lift him up. The sky is the limit.

*Notre Dame never really recruited him. He said Notre Dame is a great program and they have their own movie (Rudy). But he never really considered the Irish because they didn't really pursue him.

*He says Notre Dame is the biggest game of the year - only because it's the next game.

*On his last name, he says his dad is Samoan. His mom is half African-American and half German, so he considers himself half-Samoan and a quarter black and a quarter German. "I consider myself a little bit of everything."