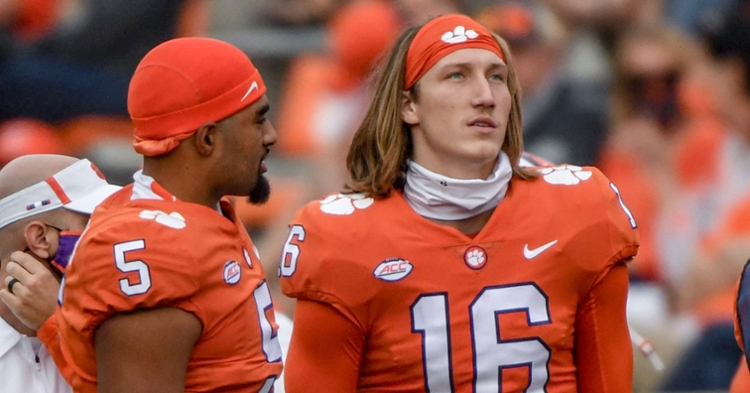 Lawrence and Uiagalelei both shined when called on this season. (ACC photo)

Continuing our look at the Tigers’ season position-by-position with the quarterbacks:

David Hood: Raise your hand if you knew that six different players attempted a pass for Clemson last season. That number includes the usual suspects – the four quarterbacks – and punter Will Spiers (who played behind center in the blowout win over Georgia Tech) and wide receiver Amari Rodgers, who was 1-1 for eight yards.

Of course, the top two were Trevor Lawrence and DJ Uiagalelei, who were simply outstanding this season. Uiagalelei started two games in place of Lawrence and only threw for a record number of yards against Notre Dame in South Bend (439). Even walk-on Hunter Helms was impressive in his short stints, completing 9-12 passes. The outlier was Taisun Phommachanh, who was just 5-17 for 17 yards and an interception. Phommachanh never looked comfortable running the offense, part of the reason Uiagalelei was able to pass him on the depth chart. After what was a productive spring for Phommachanh, his fall is concerning.

Lawrence is taking his talents to the NFL and Uiagalelei is the next in line of superstar quarterbacks for the Tigers. The big question heading into 2021 will be his backup – can Phommachanh regain his form, or will Helms ascend into that spot? How about the freshmen? Will they be able to take advantage of the opportunity?

Brandon Rink: Lawrence continued its upward track in PFF’s grades by season -- slightly -- up to 91.2, from 91.1 in 2019 and 90.7 in 2018. That freshman campaign contained his best grade as a passer (90.6) but this season wasn’t far behind (90.3) despite being disrupted midway through for COVID-19 protocols. He averaged his best yards per pass attempt mark (9.3) and improved on his school-record, career QB rating with another single-season best (169.18).

Though the season saw a reduced number of games, Uiagalelei ended up with more snaps than 2019 backup Chase Brice with the freshman stepping in for two starts and performing well. The big-game experience engineering a comeback victory over Boston College and playing under the national spotlight at Notre Dame should serve him well as the 2021 projected starter.

Phommachanh’s case is odd because he was billed as being neck-and-neck with Uiagalelei for the backup role into September, but after suffering a hand injury in Clemson’s fifth game versus Georgia Tech, he didn’t see the field again after a minor surgery. Phommachanh was rated the No. 4 dual-threat QB out of the 2019 class and he’s got a big offseason ahead of him to get on track to those expectations.