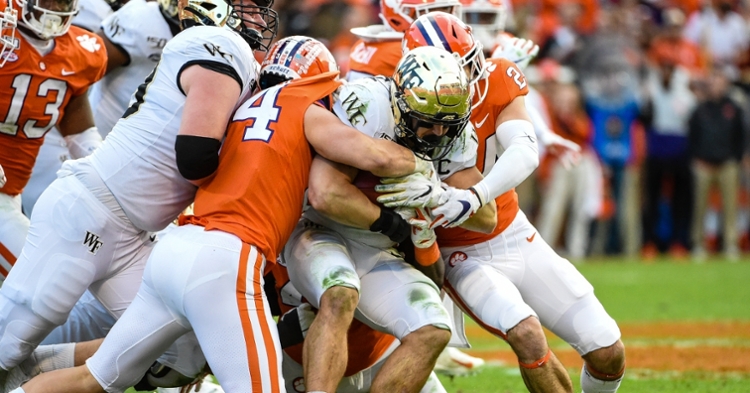 Clemson has held Wake Forest to three points each of the last two seasons.

When No. 1 Clemson and Wake Forest take the field at Truist Field in 12 days, there will likely be a limited number of fans in the stands, along with a lot of cutouts. The Demon Deacons will still be excited to take on the Tigers.

Clemson takes on Wake Forest in the season opener in Winston-Salem, North Carolina on Sept. 12th. Clemson has 67 wins (against 17 losses and one tie) against the Demon Deacons and have won 11 in a row in the series. The last win for Wake Forest was Tommy Bowden’s last game as head coach at Clemson, a 12-7 Tigers loss at Wake.

What will the opener be like? Wake head coach Dave Clawson weighed in when he met with the media last week.

“I'm not playing music as practice as much anymore. We used to always play during periods music to prepare for fan noise, so we don't have to play that now. I think communication should be better. You're going to have an easier time hearing signals and hearing cadences,” Clawson said. “And we spend a lot of work when we play a Virginia Tech or an NC State or Clemson. You have third down when you're on the road managing sound and having a silent count. And those are things now we don't have to cover so there is a strategic part to it.

“I would prefer to have to coach those things and have full stadiums and full crowds. But that hopefully that's something we can look forward to in 2021...If you envision big crowds and seeing things like that, Wake Forest has a promotional thing going on that you can get a cutout and purchase one and we can put you in there permanently and you can help fill Truist Field.”

Clawson said it will be a relief to finally take the field after months of uncertainty.

“I think there will be a great relief when we finally play a game that we know all this work and all this effort wasn't for nothing,” he said. “I mean, it's been a hard seven weeks and we have asked our players to make sacrifices that in the sport of college football's never been asked (of) players before. And so far, we're managing all these things...Our players deserve the reward of a game if they can continue this discipline.

“So, it'll be exciting when we take the field against Clemson. We're going to be excited and it's going to be a great feeling of accomplishment, that, 'Hey, we were able to do this.' And now the big challenge is are we going to be able to continue to do it?”

The Demon Deacons will be without the program’s best player – wide receiver Sage Surratt opted out of playing this season.

“I still think wide receiver is a very strong position. For us, Donavon Greene is coming along and developing nicely, especially after the end of last year (he) got to play a little bit and got some confidence. He has certainly resumed his progression and looks really good,” Clawson said. “A.T. Perry and Nolan Groulx so far I've had really good camps. Jaquarii Roberson and Taylor Morin have done a really nice job in the slot. Jahmal Banks and Donald Stewart are two guys on the outside that we expect to improve and keep getting better.

“So you know it's funny -- you look at what we lost. So right now we're not starting with one skilled player that we did a year ago. We have a new quarterback, tight end, three new receivers and a new starting tailback and yet I feel really good about our offensive skill positions. I think it's a position of strength on our football team. Now, it's inexperienced, but the talent is there. I think as those guys play and get better, we have a lot of upside in that group. So again, we would have loved to have Sage this year. We understand his decision. But we still feel we're very good at wide receiver.”