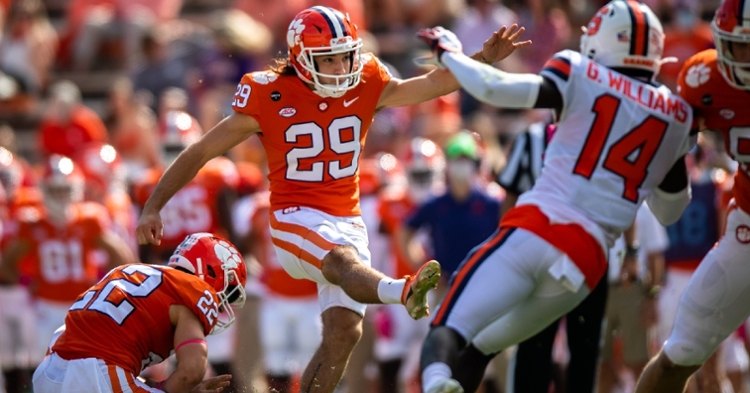 There was good news on special teams in No. 1 Clemson’s 47-21 victory over Syracuse Saturday in Death Valley. Kicker BT Potter hit two field goals, punter Will Spiers averaged 53.6 yards per punt and converted a fake punt into a first down, and Lyn-J Dixon took the opening kickoff of the game 47 yards to put the Tigers in great field position for the opening drive.

However, Potter missed a 37-yard field goal, the protection issue popped up on punt team and allowed the Orange to block a Spiers punt that led to a Syracuse touchdown.

Head coach Dabo Swinney said the fake punt by Spiers was an effort to get his team to loosen up. Facing a 4th-and-3 at the Syracuse 43, Spiers trotted out in punt formation but took the snap and rumbled six yards for a first down.

"I just felt like we were playing tight and need to loosen up a bit," Swinney said about the play call. "I thought it was there based on film study and what I had seen earlier in the game. They executed it well. I'm disappointed we didn't go out and finish with some points but it created some good field position for us."

Potter missed the field goal, however, making the fake punt go for naught.

Clemson had three field goals blocked against Miami and it looked like the protection issues were fixed as the special teams were almost perfect in the win over Georgia Tech last week. However, the blocked punt was another lapse in protection.

"We just didn't do our job. Very basic--like day one job--on the punt,” Swinney said. “That was bad and it's a very simple thing. You've got to gap down and if you do that, you're in good shape. If you don't, that's what happens. It was disappointing because they got a score out of it but we'll learn from it and make it better.”

Swinney was quick to praise the bright spots and said the coaches will continue to work to “make it better.”

“The first play of the game went about 50 yards on a kick return,” he said. “And then boom, we scored (on a 25-yard pass to Cornell Powell). We punted the ball amazing. BT. has been great all year with his field goals. He missed one but came right back and made the next one. Spiers punted the heck out of the ball. We executed a fake.