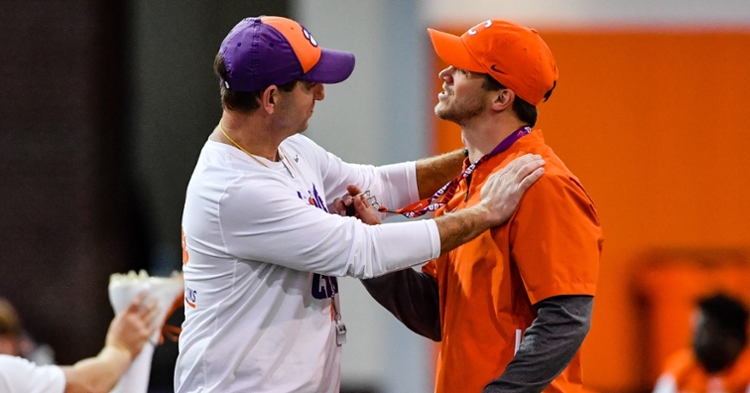 Grisham (right) gets some advice from head coach Dabo Swinney.

From crash landings (sort of) to a crash course refresher in recruiting, the past few weeks have been a whirlwind for new wide receivers coach Tyler Grisham. The time has also been a dream come true.

Jeff Scott was named the head coach at South Florida shortly after the Tigers won the ACC Championship in Charlotte. Grisham didn’t follow the coaching search too closely because he knew he had to break down film of the Ohio State defense.

It was while he was watching film, headphones on, that head coach Dabo Swinney popped into the room.

“Listen, I think Jeff has a great chance of getting the job at South Florida,” Swinney told Grisham. “If he does, are you ready? You ready to go?”

Grishman said yes, then called his wife to tell her he thought he might have a new job before heading downstairs to eat pizza and watch the College Football Playoff selection show.

“We immediately went downstairs and had our pizza party while watching the playoff show and finding out where we would go,” Coach Grisham said. “I was able to engage with all of the guys, they were coming up to me and congratulating me. It was really a great afternoon. That Sunday after the ACC championship game, I couldn’t have asked for a better introduction than that. It’s been whirlwind ever since. It hasn’t fully sunk in yet, but it is a dream come true.”

Grisham immediately went on the road recruiting and caught a flight from Clemson to join offensive coordinator Tony Elliott in south Georgia to visit a prospect. The altimeter on the plane quit working and the crew had to make a scary landing with Grisham clutching the arm rests all the way down.

Welcome to the world of recruiting.

“If you remember when Chad Morris left for SMU, they put me on the road for two weeks. I did that by myself,” Grisham said. “That was interesting but I got my feet wet then. I knew how it worked when you went to a high school and engaged with the coaches. I’ve had that experience.

“With Tony it was great. He is such a pro and does things the right way. It was amazing to watch him work. He led the way the entire time and I followed suit and watched him interact with the coaches. That was amazing.”

The first bowl practice allowed Grisham to work with the receivers on the field for the first time.

“The receivers have been great,” Grisham said. “I told them, hey listen, there are some things I don’t know. Senior leadership must do like I had to do when Jeff (Scott) went from being a Defensive GA (Graduate Assistant) to coaching receivers in 2008. The senior leadership like myself, Jacoby Ford, Aaron Kelly, and Nelson Faerber, we had to step in and help him. I told them the same thing. That’s what I need from y'all and they’ve been phenomenal.”

Grisham finished his four-year (2005-2008) career at Clemson with 1,390 total receiving yards and eight receiving touchdowns. As we sat talking, I told Grisham that one game that stands out to me was the loss to Virginia Tech in 2007 – Grisham had 11 catches for 100 yards and a touchdown. It was a gritty, determined effort that exemplified the way he played the game.

I then asked him how he will impart that style of play to his receivers.

“I think my personality is that I don’t really know anything different than giving 100% and Coach Swinney demanded that as a coach and so he got that from his players. You get what you demand,” Grisham said. “That’s what I’m going to provide for them. That expectation, day in and day out. It starts in practice. It really does.

“Obviously, we are recruiting at the highest level and the talent is going to be there but if you can’t match that talent with that effort and intensity then you’re not going to be the best player you can be. I didn’t know any other way and Coach Swinney wasn’t going to have it any other way.”

In other words, receivers have to do the dirty work in order to be a complete player.

“I’ve played with Hines Ward, he was one of the best blocking receivers so for me that’s part of the position that has to be there,” Grisham said. “Jacoby Ford, he was a track guy but gave great effort all the time on the field. We also knew that if we helped block downfield we had CJ Spiller that could break a long one and I could be a part of that, that’s a key block, that’s a helmet sticker, that’s such an important part of the game and that’s what the good NFL teams look at. They don’t want to look at the touchdowns and the catches, they look at how you play without the ball and that’s what’s really important to me.”